In March of 2010 President Obama signed H.R.3590 “Patient Protection and Affordable Care Act” into law after it passed both houses of Congress. It was hailed by his administration as being a breakthrough piece of legislation that would provide health care coverage to all Americans.

While more people will be covered by the law, it does come with it’s costs – with the biggest one being an increased tax bill for many people. While it may be a while before this plan and it’s taxes actually take effect, it’s a good idea to know what you’re in for in the coming years. (It should be noted that the law also has tax breaks to help both individuals and small businesses pay for insurance.)

UPDATE:  The Affordable Care Act has been upheld by the Supreme Court. 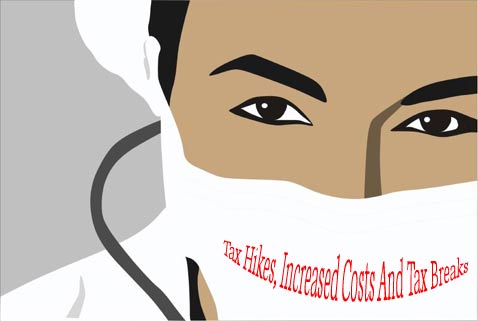 Tax Hikes You Can Expect To See

There are quite a few places where people can expect to see an increase in their taxes due to the law.  Among them (Sourced from Kiplinger.com):

In addition to the increased taxes, reduced deductions and fees, there will be some tax incentives for small businesses and individuals.

So there you have it.  Those are a few of the tax impacts that you will see as a result of the new health care law. Personally I’m not a big fan as I don’t like government telling us that we have to have coverage, and I’m not sure that moving towards more government control of medicine is the answer (We’ve all seen how wonderfully they’ve managed the oil spill, right?)  I’d be more in favor of another solution, things like portable coverage, health insurance pools for high risk individuals, and tort reform.

What do you think of the health care initiative?  Are you willing to pay more for your coverage so that others can be insured?  Will you be paying more due to any of the provisions mentioned here?  Tell us your thoughts in the comments.

Share5
Pin
Tweet
Share1
6 Shares
Last Edited: 13th December 2013 The content of biblemoneymatters.com is for general information purposes only and does not constitute professional advice. Visitors to biblemoneymatters.com should not act upon the content or information without first seeking appropriate professional advice. In accordance with the latest FTC guidelines, we declare that we have a financial relationship with every company mentioned on this site.

Previous Post: How To Avoid Flight Cancellation And Change Fees And Get A Refund For Your Air Travel
Next Post: Frugality Versus The Urge To Splurge