Most of us want to be nice people.  We want to say “yes” to others.

If our kids ask for $20 on Friday night to go out with friends, many of us want to hand over the money.  If a salesman pressures us, we want to say “yes” because we don’t want to be rude and walk away.  Yet, learning how to say no and to resist pressure tactics, whether they be from family or salesmen, can save you a bundle.

The Power of Saying “No” 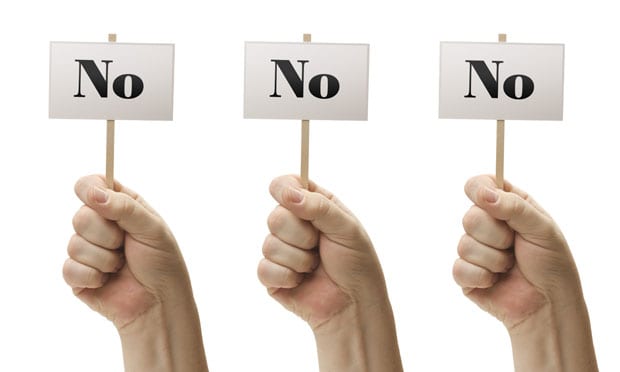 My husband and I went to a car dealership a few weeks ago.  Since our minivan is 11 years old and has 156,000 miles on it, we know a car purchase is in our future.  We went to the car dealership simply to explore and see if our three kids would fit in a Toyota Camry.  They did.

The salesman was very nice, accommodating, and friendly, until we entered his office.  True, the car that was for sale was at a very good price, likely at a better price than we would find in the next few months.  But we know that buying a car at this moment is not a smart money decision.

When I told the salesman that we were just looking and would be buying in six to twelve months, his tone changed.  “A car that is this good of a deal isn’t easy to find.  Buying it now is a no-brainer.”

When I repeated again that we weren’t looking to buy right now, we were just looking to see what the market was like, he became more aggressive.

“I don’t know how you do things, but when my wife and I are going to buy something, we figure out how much we have, and we buy it.  We have an objective, and we meet it.  Isn’t your objective today to buy a car?”

Would we have liked to have bought the car?  Yes.  It was a good deal.  But we don’t have the money to buy it now, and we knew that.  We stayed firm.

We said no, and we kept our money in our pocket.

However, that isn’t always easy to do.

My mom has wood windows in her home that are really not suitable to the Midwest where she experiences many weather extremes.  The wood is now rotting, so she knew she needed to look into getting replacements.

She is retired, and money is fixed, so she asked several companies for estimates.  The first company gave her an estimate but did not pressure her.

The second company gave her an estimate (which was the highest of all the estimates that she got) and the salesman pressured her by saying that the deal he was offering would only be valid for that day.  He told her she could sign a contract and pay a deposit that day to keep the price offered, but if she changed her mind, she could call at any time to rescind the offer.

My mom is notorious for giving in to pressure tactics, and when she told me about the situation, she said she was nervous about what she had signed.  I asked her to rescind the offer immediately because I didn’t feel she should make such a big decision without thinking it over.

She did call to cancel the contract, and the company let her out of it.  However, she had to make several phone calls to the company as well as threaten to hire a lawyer before the company gave her the deposit back.

Had she not followed her gut and rescinded the offer, had the company not agreed to cancel the contract, she would have paid several thousand more dollars going with this company than with the company she ultimately decided on.

That money is now safely in her bank account.

One simple, though not easy, way to keep more of your money is to learn to say “no” and not respond to salesmen’s or your family’s pressure tactics.

Do you find it difficult to say “no” when pressured?

Share34
Pin5
Tweet
Share4
43 Shares
Last Edited: 31st August 2015 The content of biblemoneymatters.com is for general information purposes only and does not constitute professional advice. Visitors to biblemoneymatters.com should not act upon the content or information without first seeking appropriate professional advice. In accordance with the latest FTC guidelines, we declare that we have a financial relationship with every company mentioned on this site.

Previous Post: Financial Success Hinges On The Quality Of Your Relationships
Next Post: The Important Investment Every Married Couple Should Make