I came across a great story on Yahoo the other day. It was about a man who found money in his attic (at least $45,000), and returned it to the children of the previous owner.

Josh Ferrin recently closed on his new home in Salt Lake City, Utah (actually, in the suburb of Bountiful), and decided to take a look in the attic. He found a metal box that contained a bunch of money:

Then he found seven more boxes, all stuffed full with tightly wound rolls of cash bundled together with twine — more than $40,000. Ferrin quickly took the boxes to his parent’s house to count. Along with his wife and children, they spread out thousands of bills on a table, separating the bundles one by one. They stopped counting at $40,000, but estimated there was at least $5,000 more on the table.

Can you imagine how they must have felt after finding this much cash? I would have loved to see the look on his face the moment he made this discovery. Here is how he describes his reaction to the “found money”:

“I freaked out, locked it my car, and called my wife to tell her she wouldn’t believe what I had found,” said Ferrin, who works as an artist for the Deseret News in Salt Lake City.

I remember the feeling that I had if I found money, even if it was only $1! This amount wouldn’t allow us to completely pay off our debt, but it could get us a long way there! But the “right” thing to do would be to try and track down the owner, and return the money. 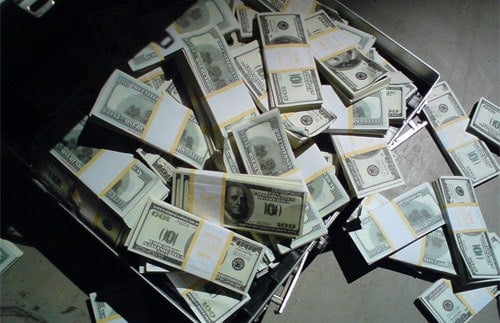 For many of us, this found money would be enough to pay off debt completely! It would mean the difference between bankruptcy and financial freedom. When you consider the fact that many people have to support themselves and their families on less than this for an entire year, it makes it easy to see how someone would keep this discovery to themselves!

Mr. Ferrin battled with that temptation as well, but chose to overcome it:

“I’m not perfect, and I wish I could say there was never any doubt in my mind. We knew we had to give it back, but it doesn’t mean I didn’t think about our car in need of repairs, how we would love to adopt a child and aren’t able to do that right now, or fix up our outdated house that we just bought,” Ferrin said. “But the money wasn’t ours to keep and I don’t believe you get a chance very often to do something radically honest, to do something ridiculously awesome for someone else and that is a lesson I hope to teach to my children.”

As a Christian, this is the type of response that I love to see. When someone has a chance to either do the right or wrong thing – especially when it comes to money – and they choose to do right, even though they can probably their deed(s) from people.

Here is how the story ended for Ferrin:

He thought about the home’s previous owner, Arnold Bangerter, who died in November and left the house to his children. Bangerter purchased the home in 1966 and lived there with his wife, who died in 2005. After most of the money was counted, Ferrin called one of Bangerter’s sons with the news.

Reading about how he handled this found money makes me realize that there are still people out there who consider the well-being of others when making decisions. He can be a good example of doing the right thing!

I think that this story presents a great opportunity for each one of us to look inside our hearts and determine what our reaction would have been. Before everyone proudly states that they would give back the money, keep two things in mind.

First, this story would not have been one of the most popular articles on the day in which it was released, unless it was highlighting something abnormal! The story had over 9,000 comments – many of them stating how they were shocked and/or pleasantly surprised by Ferrin’s actions!

Also, remember that it can be very easy to assume that we will be able to overcome a particular temptation, until we are thrown in the middle of it! Many people have an attachment or even love toward money and what it can do for them. Listen to what the bible has to say about that:

If we have food and covering, with these we shall be content. But those who want to get rich fall into temptation and a snare and many foolish and harmful desires which plunge men into ruin and destruction. For the love of money is a root of all sorts of evil, and some by longing for it have wandered away from the faith and pierced themselves with many griefs. ~ 1 Timothy 6:8-10

As we see from the verses above, the desire to be rich can lead us into much temptation, which can end in ruin and destruction. We are told that because some have a “love of money” (lit. affection for silver), that some leave the faith!

So, be sure to take the time to think about what you are willing to do for money. Evaluate your heart and search for any sin – especially look for pride and affection for money – confess it to the Lord, and put it to death!

Share41
Pin
Tweet12
Share3
56 Shares
Last Edited: 1st June 2011 The content of biblemoneymatters.com is for general information purposes only and does not constitute professional advice. Visitors to biblemoneymatters.com should not act upon the content or information without first seeking appropriate professional advice. In accordance with the latest FTC guidelines, we declare that we have a financial relationship with every company mentioned on this site.

Khaleef founded KNS Financial in order to assist people with financial matters in a more organized and systematic way. KNS Financial provides Personal Financial advice, Budgeting Assistance, Tax Preparation and Advice, Debt Management, and Economic Commentary. He also writes for the Faithful With A Few blog where he seeks to help Christians understand how to manage their finances in a way that honors God. Be sure to subscribe in order to keep up with Khaleef’s writing.

Previous Post: Famous Musician Bankruptcies: From Millions To Broke – Toni Braxton
Next Post: How To Win Cash And Prizes And Get Free Stuff: Tips For Finding Contests, Giveaways And Freebies