Our kids are finally big enough that we can start playing board games with them on the weekends.

Recently, we’ve started playing Monopoly, and my husband and I have both noticed that in our family, how each person plays Monopoly seems to be reflect their thoughts and behaviors in regards to money. 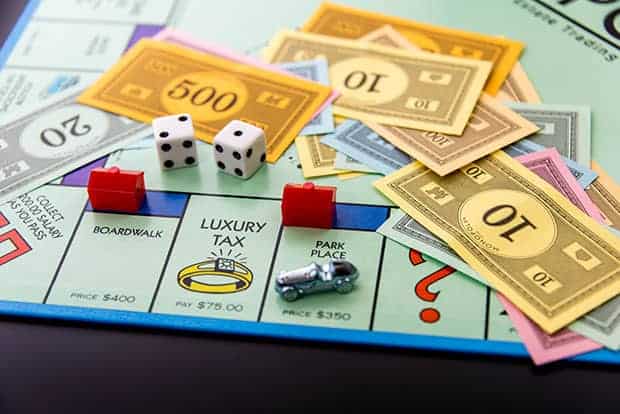 For instance, one of our children in real life is a sucker for a deal.  If something is on sale, regardless if we need it, he wants to buy it.  He gets so excited about the deal, never noticing that if he didn’t need the item in the first place, buying it on sale isn’t saving money.

When he plays Monopoly, he wants to deal, too.  As soon as he gets a few pieces of property, he wants to start trading and dealing.  For instance, if he has Ventnor Avenue and another player has Atlantic Avenue, he wants to broker a trade even though no one has yet bought the third yellow property, Marvin Gardens.  At this point in the game, making a deal doesn’t really help him, but he doesn’t care.  He just wants to make deals.

Our second child is in the middle when it comes to spending.  She doesn’t spend frivolously, but wisely.

That technique comes into play with her Monopoly playing style and is why she is a frequent winner.  She’ll buy property as quickly as she can, and then she’ll put a house on a property as soon as she is able so she’ll earn more money.  However, she doesn’t mind waiting a bit to add houses until her cash flow increases.  Because of this style, she often wins the game (unless she has a streak of bad luck).

My youngest has exhibited strong penny pinching characteristics as early as I can remember.  She frequently admonishes me not to spend money or to buy the most reasonably priced product.  Keep in mind this child is only 6!

When she plays Monopoly, her conservative style is evident.  She will buy some properties, but if her money dips to less than $500 to $800, she is done spending until she gets more money.  While I admire her firm resolve, getting ahead in Monopoly is hard if you don’t spend most of your money on property in the beginning.  In this case, her conservative money ways hurt her because she’s eventually paying rent to all of the property owners.

My husband and I, having not played Monopoly since we were young, are fascinated by the way our children’s Monopoly playing style matches their current spending style.  We’ve also noticed that the two of us each have the same general playing strategy, which is also true in real life.  We don’t frequently fight about money because generally, we have the same philosophy toward money.

My husband has even gone so far as to say that he would suggest to our children when they’re older that they play a few games of Monopoly with the person that they’re dating, just to get a feel for their money style.

At the end of the day, Investopedia puts it best:

“Of course, a board game like Monopoly shouldn’t be taken as a thorough education in finance and investing, as it certainly has its flaws. However, it does have some valuable lessons to teach, such as to spread yourself out across the board intelligently, keep cash on hand, focus on cash flows, be patient and pay attention to price.”

I’d also add that it can teach you a lot about the way other players handle money in real life.

Do you think Monopoly reflects players’ real-life money style, or are we looking into this too much?

Share8
Pin
Tweet
Share
8 Shares
Last Edited: 13th July 2016 The content of biblemoneymatters.com is for general information purposes only and does not constitute professional advice. Visitors to biblemoneymatters.com should not act upon the content or information without first seeking appropriate professional advice. In accordance with the latest FTC guidelines, we declare that we have a financial relationship with every company mentioned on this site.

Previous Post: Quit Habitually Spending Your Money So You Can Achieve Your Life Goals
Next Post: 4 Ways To Setup An Automatic Savings And Investment Plan