My husband and I are on a tight budget, but we still like to give.

We donate to our church every week, and during the Christmas season, we allocate some money to gift to others. 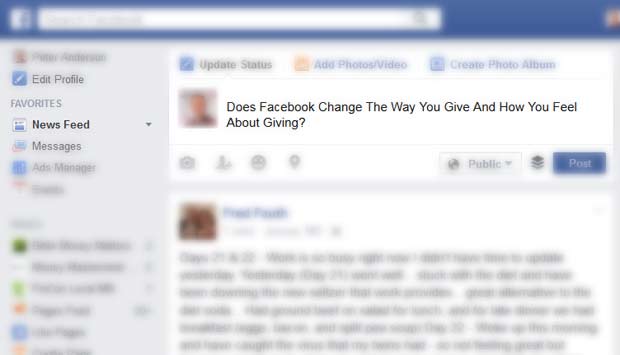 How We Used To Find People To Donate To

I used to find people to donate to during Christmas by picking a name off a giving tree at the post office or at church.  Simply put, the child wrote down what he or she wanted, and we bought it.

Of course, it was always a guessing game.  One year, a 7 year old girl wanted winter boots.  We bought them based on the style my daughters suggested, but I don’t know if that was the style the little girl wanted.  Still, she got her boots, and I, selfishly perhaps, felt good about giving them to her and making her Christmas happier.

How We’ve Used Facebook To Find People To Donate To

Last year, though, I found my family to donate to through Facebook.

I’m part of several Facebook groups based on our religion.  One group is very large (there are over 4,000 members) and several of the members were in need.  One woman, I’ll call her Jane, has six children.  Her husband works, but she shared that they were behind on both their house and car payments.  Jane couldn’t buy her children any Christmas gifts.

I bought a few of her six children gifts.  To simplify the whole process, Jane had set up an Amazon wish list so I could choose what to buy based specifically on what her children wanted.  It couldn’t get any easier than that, and I was glad I could help.

The problem, for me, with giving to someone from Facebook, is that the encounter isn’t anonymous.   I can read Jane’s posts on Facebook and see what she’s up to.  Simply put, what she’s up to is a lot more than we’re up to.

Since the beginning of the year, she and her family have gotten a new to them car (though she later stated that her husband’s parents had given it to them), she’s had construction done on her home, and she took a family vacation for two weeks.

While my family is not behind on any payments, our budget is tight.  When we do fun activities, we try to do free ones.  We pinch pennies any way we can.  We bought our house over a year ago, and I hated the faux orange/brown painting in the living room, but we haven’t yet repainted because money’s been tight.

Facebook gives me just a glimpse of Jane.  I know that she had construction done on her house, but I don’t know why.  Maybe because part of the roof collapsed and it had to be repaired.  Maybe a family member paid for her vacation.  Because I don’t know her on a personal level, I don’t know all of the details.  I just see what looks like a fairly good life.

Giving by giving to a family on Facebook has turned a good experience into one that has negative emotions too—I know I’m being judgmental, annoyed, and, if we’re too be honest, a bit jealous.  (I’d love to paint the living room sometime soon!)

Of course, there is the chance that there are valid reasons for all of Jane’s expenditures.  There’s also the chance that Jane and her husband just aren’t very good with money and that’s why they’ve had so much trouble financially.

But I do know that giving to people I know through Facebook turns the experience into a less than godly one, at least for me.

Do you think giving through Facebook could present new challenges since it isn’t anonymous?

Share12
Pin3
Tweet
Share
15 Shares
Last Edited: 2nd June 2015 The content of biblemoneymatters.com is for general information purposes only and does not constitute professional advice. Visitors to biblemoneymatters.com should not act upon the content or information without first seeking appropriate professional advice. In accordance with the latest FTC guidelines, we declare that we have a financial relationship with every company mentioned on this site.

Previous Post: Are You On Track For Retirement? Betterment RetireGuide™ Will Help You Figure It Out
Next Post: Review Of The One Page Financial Plan By Carl Richards