Jessie’s kids were 10 and 12 when her husband, Ron, was involved in a serious car accident with a semi-truck on the highway.

Thankfully, Ron survived, but his recovery was a long one and involved many medical procedures and hospital stays.

While he luckily had disability pay at his job, it only paid 60% of his salary.  The reduced salary combined with the many medical bills meant that money was very, very tight.

Carrie’s kids were 9 and 13 when her husband, Michael, was diagnosed with cancer.

He, too, had to take a lot of time off work for treatment and incurred significant medical bills.  He didn’t have disability insurance, so he was only paid for the time he was able to work.  Their finances became very strained.

Though there were different causes, both families fell on difficult financial times because of medical issues.  However, how the families handled the financial strain was opposite. 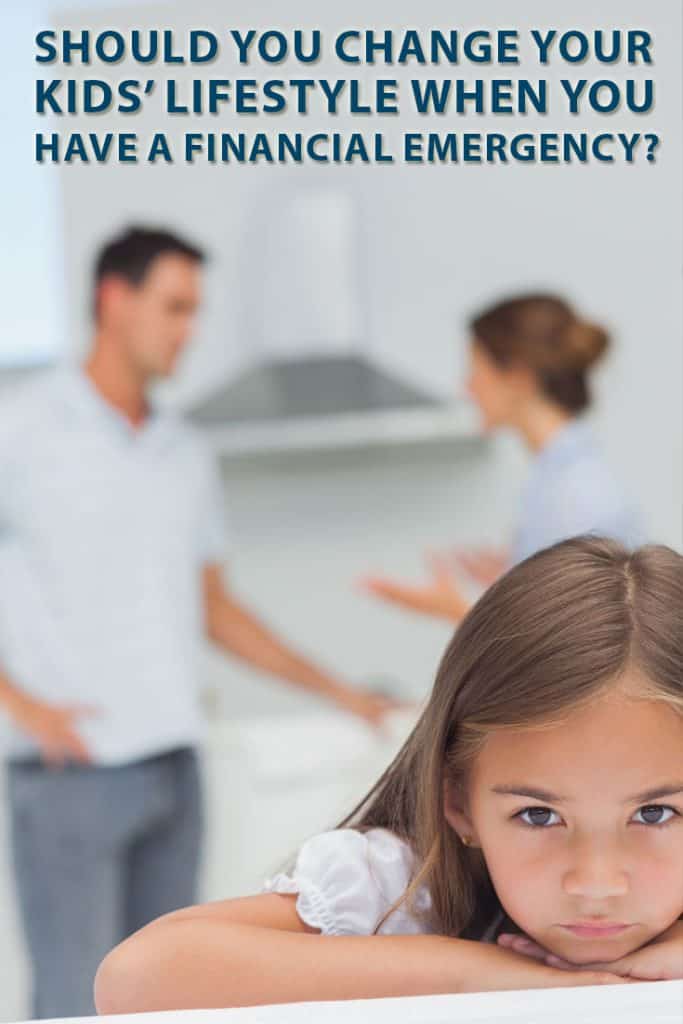 Couple #1, Jessie and Ron, wanted life to go on for their kids as normally as possible.

They were thankful that Ron was alive and wanted to make the most of being with one another.  When they could, they took outings as a family to local attractions.

They kept the kids in all of their sports, and when their 10-year-old turned 11, they made sure to have a big, expensive party just as they had for all of their children’s previous birthdays.

Restrict Expenses and Curtail Kids’ Activities When In A Financial Emergency

Soon after Michael was diagnosed, they sat down with their children to explain that they would have to work together as a family to help dad beat cancer.  One way was to cut their expenses so that Michael wouldn’t have to worry about finances while he was also being treated for cancer.

When times are tough, do you tell your kids and economize, or do you try to go about your life as normally as possible, creating memories by spending time together?

There’s really no right or wrong answer to this issue; each family copes the best way that they can.

For some, that means going to outside activities and carrying on as if nothing in life has changed.  For others, that means economizing and changing their lifestyle temporarily while the financial difficulty is present.

My Experience With A Financial Emergency

I was 14 when my dad was diagnosed with terminal colon cancer, and life changed radically.

We were never a family that spent a lot on outside activities, but all extra spending stopped when my dad was sick.

He couldn’t work, didn’t have disability pay, and my parents didn’t have a large emergency fund, so we had to rely on the generosity of others for a few months simply to get by.

The whole situation was stressful, but I did not begrudge my parents curtailing all of our extra activities.

In fact, I would have felt terribly guilty if my parents would have spent money they didn’t have to make life seem as normal as possible because life wasn’t normal then.

When my dad passed, my mom received a small life insurance policy, and thankful, she didn’t have debt to clean up first from the time my dad was sick.

All people handle a radical life disruption differently, but in the case of couple #1, chances are, eventually they’ll reach a point when the emergency fund is gone and the credit cards are at their limit, when they’ll need to economize and stop treating their kids as if everything is normal.

Why not do it earlier so they can save as much of their financial integrity as possible?

Have you had a major life issue that disrupted your finances?  If so, how did you handle it?  Did you tell the kids and start economizing, or did you try to maintain the status quo for your children because they’ve already experienced so much upheaval?

Share16
Pin3
Tweet1
Share
20 Shares
Last Edited: 9th January 2019 The content of biblemoneymatters.com is for general information purposes only and does not constitute professional advice. Visitors to biblemoneymatters.com should not act upon the content or information without first seeking appropriate professional advice. In accordance with the latest FTC guidelines, we declare that we have a financial relationship with every company mentioned on this site.