As a Christian I’m always trying to look to God’s word in order to learn about how I should be living my life, when it comes to my finances, my personal life and everything in between.

The Bible has a myriad of verses that can give us wisdom about how to deal with our money, and the area of investing is no different.

While this post is about finding Biblical wisdom about investing, it should be made clear up front that we’re told to not put our hopes in wealth and riches, but in God.

While we are to put our hope in God, that doesn’t mean that we shouldn’t be planning ahead for the future, saving, investing and diversifying our holdings.

In fact we’re told that these are all wise things to do. So let’s take a look at 30 Bible verses about investing.

Bible Verses About Getting Good Counsel 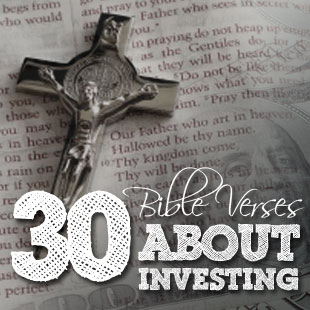 It’s important in life, and when you invest, to get good advice from others.  Without it your plans are much more likely to fail.

Proverbs 15:22 Plans fail for lack of counsel, but with many advisers they succeed.

Proverbs 19:2 Also it is not good for a person to be without knowledge, and he who hurries his footsteps errs.

Proverbs 12:15 The way of a fool is right in his own eyes, but a wise man listens to advice.

Proverbs 28:26 Whoever trusts in his own mind is a fool, but he who walks in wisdom will be delivered.

Proverbs 24:6 For by wise guidance you can wage your war, and in abundance of counselors there is victory.

Bible Verses About Planning Ahead

The Bible makes it clear that it is wise to work hard and plan ahead for the future.  Don’t get caught unaware because you failed to plan ahead.  If you plan on retiring from your chosen profession some day, make sure you plan ahead and invest for retirement!

Proverbs 13:16 A wise man thinks ahead; a fool doesn’t, and even brags about it!

Luke 14:28-30 “For which of you, intending to build a tower, does not sit down first and count the cost, whether he has enough to finish it—lest, after he has laid the foundation, and is not able to finish, all who see it begin to mock him, saying ‘This man began to build and was not able to finish’?”

Proverbs 6:6-8 Go to the ant, you sluggard;  consider its ways and be wise!  It has no commander, no overseer or ruler,yet it stores its provisions in summer and gathers its food at harvest.

Proverbs 16: 9 In their hearts humans plan their course,  but the LORD establishes their steps.

Proverbs 27:23 Be diligent to know the state of your flocks, and attend to your herds.

Proverbs 14:29 He who is impulsive exalts folly

Proverbs 24:27 Prepare your work outside and make it ready for yourself in the field; afterwards, then, build your house.

Saving up for a rainy day,  putting your money to work and multiplying it is a wise thing to do.

Proverbs 21:20 The wise store up choice food and olive oil, but fools gulp theirs down.

Proverbs 21:5 The plans of the diligent lead to profit as surely as haste leads to poverty.

Genesis 41:34-36 Let Pharaoh appoint commissioners over the land to take a fifth of the harvest of Egypt during the seven years of abundance. They should collect all the food of these good years that are coming and store up the grain under the authority of Pharaoh, to be kept in the cities for food. This food should be held in reserve for the country, to be used during the seven years of famine that will come upon Egypt, so that the country may not be ruined by the famine.

1 Corinthians 16:2 On the first day of every week, each one of you should set aside a sum of money in keeping with your income, saving it up, so that when I come no collections will have to be made.

Proverbs 27:12 The prudent see danger and take refuge,but the simple keep going and pay the penalty.

Proverbs 30:24-25 Four things on earth are small, yet they are extremely wise: Ants are creatures of little strength, yet they store up their food in the summer;

None of us knows what will happen from one day to the next, in our lives  – and in the stock market.  As a result we are best served by diversifying our holdings to protect ourselves.

James 4:13-15  Now listen, you who say, “Today or tomorrow we will go to this or that city, spend a year there, carry on business and make money.” Why, you do not even know what will happen tomorrow. What is your life? You are a mist that appears for a little while and then vanishes. Instead, you ought to say, “If it is the Lord’s will, we will live and do this or that.”

Ecclesiastes 11:2 Invest in seven ventures, yes, in eight; you do not know what disaster may come upon the land.

When we engage in business and when we invest, we’re called on to be faithful and to deal justly.  Invest ethically, and in a way that doesn’t harm others.

Ecclesiastes 12:13 Now all has been heard;  here is the conclusion of the matter: Fear God and keep his commandments, for this is the duty of all mankind.

Proverbs 13:11 Dishonest money dwindles away, but he who gathers money little by little makes it grow.

Proverbs 28:20 A faithful man will abound with blessings, but he who makes haste to be rich will not go unpunished.

Proverbs16:8 Better is a little with righteousness than vast revenues without justice.

Leviticus 19:13 You shall not oppress your neighbor, nor rob him. The wages of a hired man are not to remain with you all night until morning.

Psalm 112:5 It is well with the man who deals generously and lends, who conducts his affairs with justice.

Proverbs 22:16 He who oppresses the poor to make more for himself or who gives to the rich, will only come to poverty.

Get Good Advice, Plan Ahead, Save, Diversify And Be Faithful

Here are a few of the things I learned from the verses in this article:

It’s good to plan ahead and to provide for your family, but don’t allow money to become your ultimate goal.  Instead, set your sights on Christ and his example.

He who trusts in his riches will fall, but the righteous shall flourish as the green leaf. Proverbs 11:28

Trust in the LORD with all your heart, and do not lean on your own understanding. In all your ways acknowledge him, and he will make straight your paths. Proverbs 3:5-6

Have your own verses about saving and investing that you’d like to share? Leave them in the comments!

Share1K
Pin254
Tweet48
Share28
2K Shares
Last Edited: 19th February 2020 The content of biblemoneymatters.com is for general information purposes only and does not constitute professional advice. Visitors to biblemoneymatters.com should not act upon the content or information without first seeking appropriate professional advice. In accordance with the latest FTC guidelines, we declare that we have a financial relationship with every company mentioned on this site.

Previous Post: Spending And Your Friends: What Happens When You Have Differences In Income?
Next Post: What We Can Learn From Jeremy Abbott’s Olympic Fall