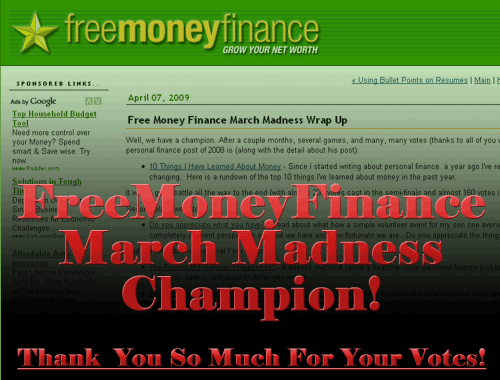 It’s Been A Long Road

Over the past few weeks I’ve been asking everyone to vote for my article, “10 Things I Have Learned About Money” in the Free Money Finance March Madness competition.   I’m sure most of you have gotten a little tired of it, but all the begging for votes has finally all paid off! At the end of the week last week I found out that I would be competing in the championship game.

Over the weekend I found myself in a tough championship match pitted against one of the sites that actually inspired me to start blogging, Gather Little By Little.  The voting was a roller coaster affair, with me starting out in the lead, then @glblguy charging ahead to take over.  I was behind for much of the match by anywhere from 5-10 votes.

Finally after midnight, the night before the competition ended I received a enough votes from my followers on twitter and friends on facebook to take the lead by 3 votes.  Glblguy did get another vote early in the morning, but by that time the competition was closing down and I came out victorious by 2 votes.  The final tally was 81-79.   So close!

Thank You And Congratulations

I just wanted to take a moment to thank all of you for taking the time out of your day to vote for me in the competition,  you really did make a difference.  It was such a close, hard fought race!

My congratulations go to Larry for the great job he did, and for the $300 donation he was able to donate to his charity, the American Diabetes Association.  It’s also a very worthy cause, and one near and dear to Larry’s heart.

Since my article won, FreeMoneyFinance.com made a donation of $500 to Second Harvest Heartland in my name.  Second Harvest Heartland is a food bank that feeds thousands of needy families every year.  $1 in donations actually helps to distribute $9 worth of groceries.  So our $500 donation will help to distribute over $4500 worth of groceries!  That quite an impact!

Second Harvest Heartland asked me to write a guest post about my experience in the competition, and talk about why I chose them as my charity.   I wrote it up and you can now read it on Second Harvest’s blog:

Thanks again to everyone that helped me to make it all the way through the competition, and if you haven’t already, make a donation!

I look forward to meeting you all in the competition next year to defend my title!

Previous Post: Personal Finance Bible Verse Of The Day: Do To Others
Next Post: Government Making Home Affordable Refinance And Loan Modification Program: Do I Qualify?