When I was attending FINCON11 a couple of years ago one of the panels contained several company representatives on the dias, one of which was a rep for a payday loan company. Since the conference was mainly personal finance bloggers and financial experts you can probably guess that the atmosphere was a bit charged and some people were really not happy that the guy was there. I can remember tweets going out on the conference Twitter hashtag bashing the guy and telling him to get lost.

While I’m not sure that it was a good thing to bash the guy like that, I can understand where the hostility was coming from. In a lot of ways the payday lending outfits of the world fill a niche that essentially takes advantage of people when they’re going through hard times. They charge exorbitant interest rates for short term loans and people often find themselves in a never ending cycle of debt and despair.

While I’m not completely against payday lending of any sort, as I think they can actually fill a legitimate need, I know that far too many of the payday lending companies take advantage of people, and engage in unethical practices. So why do companies do it? Because it’s profitable. 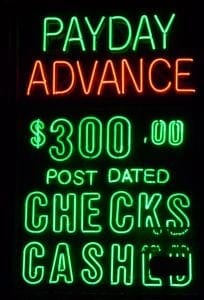 Today I was reading in the Washington Post that quite a few traditional big banks are now engaging in similar practices, and have essentially added on payday lending as an option, even if it isn’t under that name. Apparently they couldn’t resist the easy money.

Some of the nation’s largest banks are providing short-term loans with interest rates of up to 300 percent, driving borrowers into a cycle of debt, according to a new report from the Center for Responsible Lending.

Banks market these products, with names such as “Early Access” or “Ready Advance,” as short-term solutions for emergencies. But the average borrower took out at least 13 loans in 2011 and spent much of the year saddled with the debt, according to the study by the advocacy group. Researchers looked at a sample of 66 direct-deposit advances over a 12-month period.

The banks stressed that they were only offering this as an option because a lot of people need the service in the event of an emergency, however, studies have shown that people aren’t just using these loans for emergencies, but are using them for expected costs like rent and utilities.

Critics say the structure of advance-deposit loans promotes a cycle of debt. Account holders typically pay up to $10 for every $100 borrowed, with the understanding that the loan will be repaid with their next direct deposit. If the deposited funds are not enough to cover the loan, the bank takes whatever money comes in, triggering overdraft fees and additional interest.

Officials at Wells Fargo say the bank leaves its customers a $100 cushion in cases where the deposited funds are not sufficient to repay the advance. The bank, which rolled out the product in 1994, offers an installment plan for customers to avoid balloon payments. But it is offered only to people with at least $300 in outstanding debt who have been hit with balloon payments for three consecutive months.

“We’re very clear that this is an expensive form of credit and not to be used as a long-term solution,” said Wells Fargo spokeswoman Richele Messick. “We are very upfront and transparent with our customers about this service.”

The banks say that they’re offering a more affordable option than a lot of the storefront payday lenders, and while that may be true to a degree, some people are concerned that the banks aren’t subject to as much regulation as the payday lenders.

Consumer advocates are concerned that federally regulated banks can sidestep stricter state laws that govern payday lenders. At least 15 states have banned the service, while several others have imposed tougher laws to limit the number of loans that can be made and the interest rates.

The Consumer Financial Protection Bureau has supervisory and enforcement authority for storefront and bank payday lenders with more than $10 billion in assets. Officials at the bureau say they are monitoring the market. The bureau issued a request for comment last year to gauge consumer and industry concerns.

How Many Are Using Payday Loans Every Year?

So the question is, just how big of an issue is this?  How many people are using payday lending every year?

Twelve million Americans use payday loans a year, taking out an average eight loans for $375 and spending about $520 on interest, according to a July report by the Pew Charitable Trusts. The think tank found that most borrowers use payday loans to cover living expenses such as utilities or rent, not unexpected emergencies. The average borrower is indebted about five months of the year.

So it sounds like this is quite a problem, helping people to create a cycle of debt.

I’m not for completely getting rid of payday loans because I think that in some situations people who might not be able to get a traditional loan – might be left out in the cold, and I’m not sure that’s what we want.  But when people are paying that much interest and losing that much money by taking these loans out that’s a very real problem.

What are your thoughts on these types of loans?  Were you aware that the big banks engaged in advance deposit loans – similar to payday lending?

Share6
Pin
Tweet
Share
6 Shares
Last Edited: 22nd March 2013 The content of biblemoneymatters.com is for general information purposes only and does not constitute professional advice. Visitors to biblemoneymatters.com should not act upon the content or information without first seeking appropriate professional advice. In accordance with the latest FTC guidelines, we declare that we have a financial relationship with every company mentioned on this site.

Previous Post: 4 Board Games That Can Help Teach Lessons About Personal Finance
Next Post: There Are Always More Ways To Cut Your Expenses