This past weekend was an expensive one for me.  And it didn’t have to be.

Friday night was going to be a fun evening.  I had a company softball game that I was taking part in, and we were all leaving work early to partake in this company game.  Our company has two sub-companies, and the two divisions were having a grudge match of sorts.  And to top it all off our parent company was going to foot the bill for an all you could eat and drink picnic dinner afterwords at a local bar. What could be better?

I was really looking forward to the game.  I hadn’t played last year, but this year I wanted to be a big part of my group taking home the winner’s trophy, and the bragging rights. 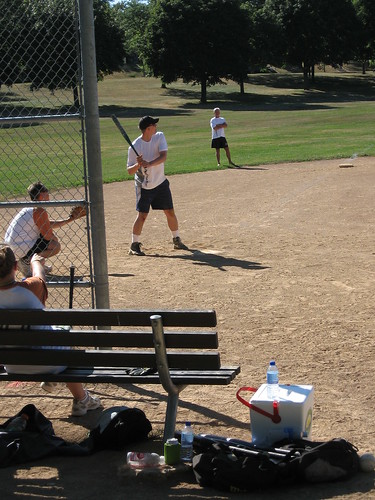 I left work around 3pm so I could get to the field on time to take some batting practice, and field a few grounders.  I pulled up to the softball fields at about 3:15 or so, and got out of my car.  After talking to a co-worker I went around to the back door of my car to grab my cleats, baseball glove and my bag.

And that’s when I made my fatal mistake.   I forgot to lock the back door to my car.   Boy was I going to regret that.

I met up with my colleagues at the field, and we had a wonderful time as my team ended up winning the game in an exciting 7th inning defensive stand.  The final score of the game was 11-9.

We were all excited, jumping up and down and rubbing it in with our losing co-workers as we got ready to head over to the neighborhood bar for dinner and drinks.  I met up with my wife and some friends who had showed up at the game, and we headed to our cars to leave.

I got into my car, and looked around.  Something didn’t feel quite right.  Why was my center console wide open, and papers strewn all over the floor?  Where were the walkie talkies that had been sitting in that center console?  And wait, where was my Ipod,  my Twins jersey and my digital camera? All had either been under the back seat or in the glove compartment, and now were nowhere to be seen?  They were all gone!

I started to panic. I got up and started looking frantically around the car, trying to figure out where they might be.  And then it dawned on me. I had been robbed.  Some jerk had probably gone walking down the row of parked cars there for the softball games, trying all the door handles until he found one that was open.  When he got mine open he hit the jackpot because like an idiot I had left all my valuables in my car – with the door unlocked.

I called the police, but apparently there were no squad cars available to come and take a report. They suggested that I fill out an “theft from a motor vehicle” report on the city’s website. Self service law enforcement!

When I got home I checked my insurance policies for both auto and home to find out if any of my stuff would be covered under those contracts. They might have been covered under our homeowner’s policy, but only the amount that was over our $1000 deductible. I had only lost about $700 worth of electronics and other valuables. So basically everything was a total loss. So, what did I lose this weekend through my carelessness?

So this weekend I learned a valuable lesson (and an expensive one at that!). Always lock your car, and never leave any valuables in plain site. If you do you’ll regret it like I did.

I also learned that when you lose things, they can be replaced, and they are not as important as some other things in life like family, friends and faith.   Those are the things that keep you going, and that lift you up when you go through hard times like this.

So I woke up this morning, and my eye is swollen shut – so that just tops off my horrible no good weekend.

So I’m off to the doctor’s office this morning.  Anyone else have something bad (or good) happen this weekend?

UPDATE: Apparently I had an infection in my eyelid. I ended up having to get my eyelid sliced open and drained.  Tons of fun! Here’s a good verse for today:

“Never will I leave you; never will I forsake you. So we say with confidence, “The Lord is my helper; I will not be afraid. What can man do to me?” Hebrews 13:5-6

Share2
Pin
Tweet
Share
2 Shares
Last Edited: 3rd April 2014 The content of biblemoneymatters.com is for general information purposes only and does not constitute professional advice. Visitors to biblemoneymatters.com should not act upon the content or information without first seeking appropriate professional advice. In accordance with the latest FTC guidelines, we declare that we have a financial relationship with every company mentioned on this site.

Previous Post: A Credit Card You Can Use To Help Others, And Get A Good Rate Too!
Next Post: Personal Finance Bible Verse of the Day: The simpleton never looks