This past week I’ve been getting all of my tax information together to make my final estimated tax payment for the one that’s due on January 15th. One thing I’ve realized during that time is that sometimes the tax information isn’t all that easy to find when you’re searching the IRS site. For example, if you’re looking to find what your marginal tax rate is, often you’ll end up in being referred to some obscure IRS .pdf document, that supposedly has the information you’re looking for, but when you open it, doesn’t. I thought I’d put out a quick post referencing the 2009 official IRS marginal tax rates for others out there looking for the information.

Here are the official IRS tax rate tables for the 2009 taxpaying season.

Things that have changed from last year.  From IRS.gov:

No matter what happens every year, one thing is for sure. As long as you’re making income, you will be paying taxes.  So if you’re going to be paying taxes, be sure to make the best of it.  Be organized for tax season, take the income tax deductions that are available to you.   Don’t forget about often forgotten tax credits like the home improvement tax credit, or deductions like the new car sales tax deduction. If you do, you’ll be leaving hundreds or even thousands of dollars on the table. 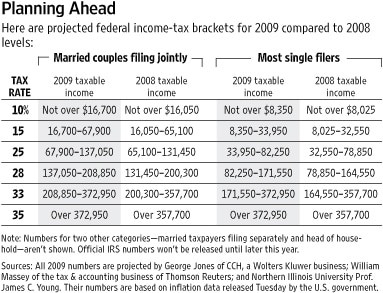 Are there tax credits or deductions that you think people should remember this year?  Are there tips you can give to be more organized about your taxes?  What do you think of the 2009 tax brackets?  Do you come out better because of them?

Share
Pin
Tweet
Share
0 Shares
Last Edited: 16th January 2010 The content of biblemoneymatters.com is for general information purposes only and does not constitute professional advice. Visitors to biblemoneymatters.com should not act upon the content or information without first seeking appropriate professional advice. In accordance with the latest FTC guidelines, we declare that we have a financial relationship with every company mentioned on this site.

Previous Post: Blueprint For How To Make Money With A Blog: Laying A Solid Foundation – Setting Up Your Site
Next Post: Important Tax Rules For The Self Employed: Payments Are Coming Due!