What you say, how can saving $0.50 on a box of dish detergent cost me money? Well, sometimes in our eagerness to use a coupon and save money we can often lose site of the big picture. Not only can focusing too much on saving an extra $0.25 cents take your attention away from bigger goals like enjoying the moment, slashing debt, or increasing your salary, just using the coupon can cost money that you didn’t think about.

Here are 11 ways that using a coupon or buying on sale can actually cost you more money than you save. 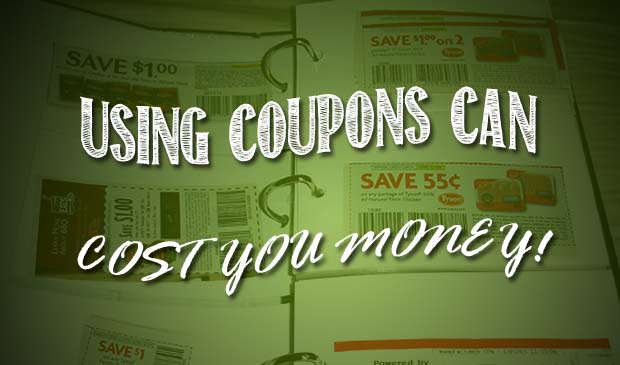 Buying Something You Don’t Need

Companies create coupons to get customers to spend more money. If they were losing money consumers most likely wouldn’t see coupons. With that said anytime coupons can compel us to buy items that we don’t need or wouldn’t have bought otherwise, we lost. Saving $2.00 off a $20 item is good, but not spending the $20 in the first place is much much better.

Coupons To A Store You Don’t Normally Frequent

Anytime you go to a store because of a coupon it is often a losing situation for you. The tendency is to buy the new and interesting offerings or to add a new store that you ‘have’ to shop at.

Coupons that require you to spend a certain amount in order to get the percentage off are often not that good. When the percentage or the price tag is high the math sometimes works, but often we end up buying frivolous items just to take advantage of a dollar or two off.

We often feel like we are losing free money when we don’t spend a coupon, but the truth is you don’t have to use the coupon. The moment you start feeling like you have to use something, it is a warning sign that some deeper psychological tactics are at work.

Sales Or Coupons That Aren’t A Deal

Stores can slap a 2 for $2.00 sticker on an item that costs a dollar and there sales on that item go up. You might think you wouldn’t fall for that trap, but statistically you most likely have. It is especially prevalent for consumers or items that you don’t have a clear price memory. Displays at the end of the isle work the same way too. The positioning of items on the shelves and in the store are critically important to moving goods regardless of price. Often the least expensive items are high or low on shelves and the highest profit items are at eye level or in direct line of sight.

Often because we know we are saving money we figure we can buy a more expensive item for the same price. That is fine and often desirable, but when you could have managed with a $30 blender instead of a $60, you lost. The same often goes for buying more of something.

The three bags of carrots you got a great price on that sit in the fridge and rot weren’t a good deal. Often times we buy stuff that can’t be used in a reasonable amount of time just because it is a deal.

Buy One Get One Free (BOGO)

Often the lure of a BOGO is too hard to resist. We feel compelled to buy it just because we get two for one. Often we don’t even need the item, but the BOGO sucks us in. Very related to buying something you don’t need. Just because you are getting a good deal, doesn’t mean you have to buy it.

One of the goals of coupon or sale is to increase loyalty to a particular store or brand. Loyalty is fine, but if it comes at the cost of not taking advantage of better stores or better prices than you lost. Generic brands are often, but not always, the same ingredients and quality as name brands. The store down the road might have better prices, but you might not know because your store sends you or special VIP coupons.

Anything That Involves Credit

If a store gives you a deal if you just charge their card, BEWARE. Why would they do that?…Because they are going to make much more money off interest and fees than they give out in coupons. Plus statistically you will probably buy more. Almost every store gives you 10% or 20% off your first purchase when you sign up for their credit card, just to suck you in. I know, I know, you aren’t one of those people that is bad with credit, but someone is. You need to be honest about your habits.

Now a days this is a huge issue. That $0.50 off at local ice cream shop isn’t such a good deal when you factor in the gallon of gas at that it took you to get there. Unless you are saving multiple dollars, trips to out of the way establishments are almost never worth it now.

It’s Easy To Lose Sight Of The Big Picture

Here is a story that illuminates how easy it is to lose sight of the big picture. My local grocery store sent my $5 off $40 every week. I was ecstatic. I do my normal shopping there, so I was excited every time I used the coupon. Every one loves free money, right? After a while though I started to realize that I had lost focus on the big picture. I started to feel like I had to spend the money. Even on weeks when we didn’t need much, I would struggle to get to the store just to spend $25 on the things we needed and having to make $15 in impulse purchases to use the coupon. Then there was the sickening feeling when you did your shopping and forgot the coupon!

Then a new grocery store opened up by us, but I was so loyal to other store that I automatically didn’t like the new store because they didn’t have coupons. I knew my other store and the other store was designed by a 5th grader(or so I told myself). I eventually let go of my loyalty and realized the other store was cheaper, nicer, and had better selection, so I started going to both stores just to keep using the coupon. After a year or so I finally gave up the old store completely because it wasn’t worth the time and energy. The coupons stopped coming. What a relief…plus I was saving more than the $5 coupon other ways and getting a better selection of food!

Have you caught yourself falling trap to any of these situations? Are there other situations were coupons and sales have cost a lot more than your first thought?

This is a post from the folks at TheHappyRock.com.

Share45
Pin7
Tweet34
Share4
90 Shares
Last Edited: 14th August 2014 The content of biblemoneymatters.com is for general information purposes only and does not constitute professional advice. Visitors to biblemoneymatters.com should not act upon the content or information without first seeking appropriate professional advice. In accordance with the latest FTC guidelines, we declare that we have a financial relationship with every company mentioned on this site.

Previous Post: Your Home Is An Investment, But Not If You Raid It Constantly
Next Post: How To Make Coupons An Effective Part Of Your Overall Saving Strategy