We’ve all probably heard the stories trotted out there by life insurance salesmen, the ones where the otherwise healthy 30 year old father of 3 gets hit by a bus on his way to work, only to leave his family in the lurch because they had no life insurance. Or the older man who has no insurance policy and dies leaving a big bill for the funeral and burial – and no way to pay for it.

While stories like these aren’t certainly the norm, and they’re often used as a way to scare us into buying a whole life insurance policy that doesn’t fit our needs or situation – tragedies can and do happen. The thing is, no one ever thinks that they’re going to happen to them.  I know for me, through my 20’s I had a sense of invulnerability, and  didn’t think I’d need life insurance, at least not until I had kids.

Since I’ve had a son, however, I’ve been rethinking the idea of not needing insurance, and a little while back I finally gave in and bought enough to cover my income if I were to pass prematurely.  You may want to consider it as well.  If you think a tragic accident can’t happen to you, try reading up on some of the sad stories online of people who didn’t think they needed life insurance.

Stories Of Why You Need Insurance

In researching for this article I did a search to find some true stories of people who neglected to buy insurance despite not being very old or thinking they had much risk.  I found way more stories than I could ever share here.  I thought I’d share just a couple of them.

Here’s one father who had no insurance and left behind 6 kids and a wife when he died at 43:

He smoked since he was 13 or something like that I heard my mom say. He’s always smoked… one day my mother noticed he would make a face whenever he pushed on the brake. She asked him if he was ok, of course he said he was.  He hated going to the doctor’s. But as time went by the pain got worse and worse. So my mom ended up dragging him there.  The cancer that had started in his lungs had spread all over his body. The doctors gave him 6 months to live. They tried chemo but unfortunately didn’t work. He died at 43 leaving 6 of us behind. The oldest 17, the youngest 4. I was only 7. He didn’t have life insurance so we had a lot of financial trouble after he died.  My mom had never worked in her life before that so she had to suffer a lot doing odd jobs to support 6 kids on her own.

Another family – a man and his wife were excited to be having their third child, but unfortunately she ended up dying due to complications from the birth:

Like many people these days, Robert Carmichael is looking for ways to trim the family budget. He’s using coupons and shopping at discount grocery stores. He even traded in his gas guzzling SUV.
But unlike many others, he’s saving money to pay for his wife’s funeral.

The 40-year-old carpenter from Lake Villa lost his wife in July. And that was just four days after she gave birth to their third child. “You go to the hospital to have a baby, and then this,” he says. “You never know what life will throw at you.”

Carmichael’s wife, Sue, 36, had an emergency C-section because of complications from her high blood pressure condition. The surgery went well, Robert said, and baby Daniel was born without a problem. But Sue contacted a bacterial infection not long after the operation. That led to pneumonia, Carmichael says. Sue died four days after the birth.

The couple had life insurance that would have easily paid for the funeral expenses, but they canceled the policy a short time before Sue died.
“Our money was really tight,” Carmichael said. “We’re both young, and figured we could get by without it.”

I also heard another more positive story a while back about a family that was taking Dave Ramsey’s Financial Peace University class, who finally decided to get life insurance after putting it off for several years.  Shortly thereafter the father was diagnosed with brain cancer, but because he had purchased insurance in time his family was well taken care of after he was gone.

The point of all these stories isn’t to scare you, but more to bring home the point that tragedies happen every day, and you really should be planning for it – especially if you have people depending on  you.

What Kind Of Insurance Should You Buy?

When it comes down to what type of insurance you should buy you have a few different options.  Whole, variable and term life insurance policies are all options that you’ll need to consider.

How Much Insurance Do You Need?

How much you decide that you need is a personal decision based off of the lifestyle you’re living, ongoing expenses, debts, timeframes and how much you’ll need to maintain the same level of living if one of you were to die.

Getting a quote for life insurance is usually a pretty easy process.  Read about how we went through the process of buying term life insurance a while back.   There are a variety of good places to get insurance quotes.  Here’s a couple to get you started:

After entering your basic information you’ll get a quote for good term coverage that usually is extremely cheap for the peace of mind you’re getting.

For our family my coverage came out to around $30/month for $500,000 in coverage.  As long as you’re in decent health cheap term coverage should be similar, or even cheaper, for you.  Give it a shot through the link! 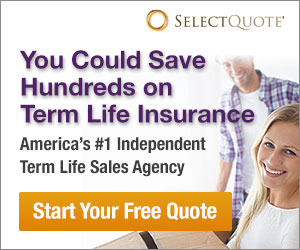 Share7
Pin
Tweet
Share
7 Shares
Last Edited: 14th July 2015 The content of biblemoneymatters.com is for general information purposes only and does not constitute professional advice. Visitors to biblemoneymatters.com should not act upon the content or information without first seeking appropriate professional advice. In accordance with the latest FTC guidelines, we declare that we have a financial relationship with every company mentioned on this site.

Previous Post: Do You Really NEED it? Or Just Want It?
Next Post: Where Did You Get Your Money Smarts?