My wife and I are right now going through the process of building a new house while we’re selling our current house.  We just listed our house for sale earlier this week and had a couple of showings on the first day after listing it.  No sale yet, but we’re hoping that we find someone to buy our home soon.

When you’re going through the reams of paperwork that you receive when you’re applying for mortgages there are a million and one things that you may have questions about as I did.  There are so many different miscellaneous charges when you get a mortgage, from closing costs and appraisal costs to prepaid items and insurance.

What Is Title Insurance? 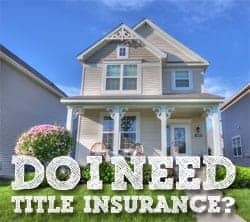 Title insurance is required by almost all lenders and insures either the owner or the lender against defects in the home’s title.  What kind of defects are covered are pretty varied and can include things like forged signatures on titles, improper execution of documents, unpaid judgements or taxes and more.

For example, imagine you buy a house from the original owners.  You don’t think you would need title insurance in that case. But what if the couple is going through a messy divorce and the wife has forged the husband’s signature on the documents, and sells the house without his knowledge.  He could come back later and lay claim to the house, and if he can prove the claim you may be out of luck. If you have a title insurance policy, however, you’ll be protected.

Here’s an explanation of why you may need title insurance from an e-book guide I found online called “The Smart Consumer’s Guide to Reducing Closing Costs”.

Any home you’re thinking of purchasing might have gone through several ownership changes over the years, and the land on which it stands probably went through many more. A weak link could have emerged at any point in that chain that could cause you trouble. For example, someone along the way may have forged a signature when transferring a title, or there may be unpaid real estate taxes or other liens on the property. Title insurance covers the insured party for claims and legal fees that arise out of such problems, subject to the terms and conditions of the policy.

So title insurance protects you against possible problems with the title of the home you’re buying, and is usually a good idea.

There are a couple of different kinds of title insurance that you can buy.  First is the loan policy or lender’s policy.  Second is the owner’s policy.

The lender’s policy is usually required by your lender, and is something that you’ll usually have to pay for.   It will protect your lender’s investment in your loan and keep them from any potential losses due to title disputes. Many banks also require this coverage because they sell the loans to investors in the secondary market, and investors need to be assured that they are receiving loans with clean title.

The owner’s title insurance policy isn’t required, but is usually a good idea.  Again, it protects your investment in the home against loss due to title defects.

You Can Shop Around For Title Insurance

While most people usually just agree to and pay for their title insurance costs stated on their Good Faith Estimate (GFE), you can shop around to find a better deal.

In states that you are better able to shop rates, you can sometimes find better rates by buying lender’s and owner’s policies at the same time,  and getting a “simultaneous issue rate”.  You can also save by bundling in the title and settlement services as well.

In our case the lender is offering a title company that they actually own, and by doing some quick looking around online I was able to find another title insurance and settlement company that is able to save us several hundred dollars on the closing costs.  For a few hours work not a bad return.

Share144
Pin62
Tweet
Share2
208 Shares
Last Edited: 21st June 2013 The content of biblemoneymatters.com is for general information purposes only and does not constitute professional advice. Visitors to biblemoneymatters.com should not act upon the content or information without first seeking appropriate professional advice. In accordance with the latest FTC guidelines, we declare that we have a financial relationship with every company mentioned on this site.