Recently, though, I had an epiphany. He’s a 10-year-old boy. He loves all things gadget-y, and he’s fascinated with my iPhone. So, I decided to bribe him with the idea of using the cell phone to deposit money.

First of all, I had to get him excited about the prospect of depositing money into the online savings account. So I showed him that, even though he hadn’t added money to the account in a couple of years, it was still earning interest. We looked at the account history, and he could see that he had been earning free money. Then we compared the interest rate on the online account with the rate from the brick and mortar account. 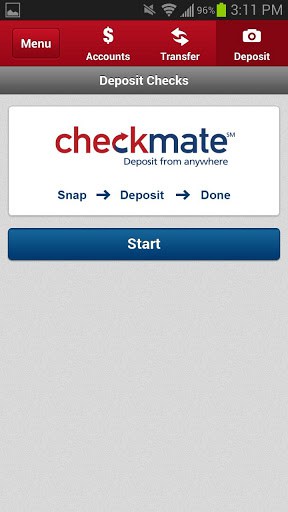 We talked about how there was more free money to be earned with the online account. Still, though, he was hesitant. He really likes the physical aspects of depositing money.

That’s when I told him he could deposit the money with the cell phone. Of course, it takes a little doing, but, in reality, it’s still easier than driving out to the credit union. Here are the steps we followed to deposit the money into his online account:

While process was a little cumbersome, it only took about five minutes total, and my son relished every second. He wants to withdraw all his money from the credit union now and move it to the online account. He’s also excited to save up his money, demanding to know how much he needs to save up before I think it’s worth it to write him another check that he can deposit via cell phone.

I’m glad that this experience has re-kindled an interest in saving in my son. I’m also glad that it has laid a foundation for talking about interest, since he’ll be ready to start learning about investing in the next couple of years.

How do you encourage your kids to save?

Share17
Pin4
Tweet
Share3
24 Shares
Last Edited: 10th February 2014 The content of biblemoneymatters.com is for general information purposes only and does not constitute professional advice. Visitors to biblemoneymatters.com should not act upon the content or information without first seeking appropriate professional advice. In accordance with the latest FTC guidelines, we declare that we have a financial relationship with every company mentioned on this site.

Miranda is a freelance writer and professional blogger. She writes for a number of personal finance blogs, including the AllBusiness Personal Finance Corner. She has a M.A. in journalism, and is the main author of Planting Money Seeds. Miranda lives Utah, where she enjoys spending her free time reading, traveling and playing with her son and husband.

Previous Post: The Power Of Saying Thank You To Improve Your Life
Next Post: What Is Title Insurance And Do I Need It?