What are the rules if you inherit a Roth IRA?

It’s important to know, because an inherited Roth IRA can trigger:

Contrary to conventional wisdom, an inherited Roth IRA does not pass on to its heirs tax free, unless the sole heir is also the deceased owner’s spouse. 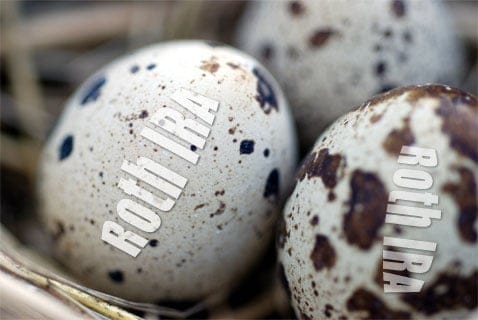 Just like any other asset, a Roth IRA is subject to estate taxes.

However, keep in mind that the deceased owner’s original after-tax Roth IRA contributions are NOT subject to estate taxes – only the tax-free earnings generated on those principal contributions.

What happens if you inherit a Roth IRA and immediately withdraw some or all of the funds? Is your withdrawal subject to the early withdrawal penalty if you’re under age 59 ½?

According to the Roth IRA withdrawal rules outlined in IRS Publication 590, the 10% early withdrawal penalty is waived if “you are the beneficiary of a deceased IRA owner.”

So if you recently inherited a Roth IRA, you don’t have to worry about triggering a 10% early withdrawal penalty.

Nevertheless, you do need to worry about income taxes.

So what are the requirements of the 5 year rule?

A Roth IRA meets the 5 year rule requirement on the first day of the fifth tax year after the Roth IRA was opened and funded.

For example, let’s say you opened and funded a Roth IRA on May 5, 2010. Under this scenario, when will your Roth IRA meet the requirements of the 5 year rule?

Remember this rule, because it’s an important one to remember if you wish to minimize the tax liability of an inherited Roth IRA.

Also keep in mind that different rules apply to spousal and non-spousal beneficiaries.

If you inherit a Roth IRA from your spouse, you have two options:

If you elect to treat the Roth IRA as your own, it takes on all the characteristics of your own Roth IRA – the same as if you had opened and funded it yourself.

At this point, simply follow the normal Roth IRA rules, and you can avoid taxes altogether.

Non-principal withdrawals before age 59 ½, or before the requirements of the 5 year rule are met, will trigger an early withdrawal penalty and income taxes, but the original principal contributions can be withdrawn tax-free and penalty-free at any time.

In addition, you can make addition contributions to the inherited Roth IRA (assuming you qualify to make Roth IRA contributions), and you can allow funds to grow tax-free in the Roth IRA for as long as you wish (there’s no minimum distribution age).

Alternatively, you can elect to delay your withdrawals until the time when your spouse would have reached age 70 ½.

Under this scenario, you must begin making annual minimum withdrawals from the inherited Roth IRA starting in the year in which your spouse would have turned age 70 ½.

Essentially, the inherited Roth IRA will take on the same rules governing a Traditional IRA (except you won’t owe income taxes on qualified withdrawals).

If you inherit a Roth IRA from someone other than your spouse, you:

The first two points are self-explanatory, but what are the minimum distribution rules?

Under the minimum distribution rules, you have two options as a non-spouse beneficiary:

Under the first option, you can withdrawal all the funds in the Roth IRA tax-free if you play your cards right.

You can immediately withdraw the $10,000 principal tax-free and penalty-free. But withdrawal of the $2,000 in earnings will trigger income taxes until the account meets the requirements of the 5 year rule.

On January 2, 2015, you’re free to withdraw the remaining $2,000 without taxes or penalties, because the account will meet the 5 year rule requirements, and you will have successfully withdrawn all of the funds in the account before December 31, 2017 (the fifth calendar year following your father’s death).

Under the second option, you can elect to receive an annuity which pays out over the course of your expected lifetime.

If you choose this option, the length of your expected lifetime is predetermined by IRS tables based on your current age and the current value of the account.

Unless you’re the spouse of a deceased Roth IRA owner who elects to treat the inherited Roth IRA as your own, the tax and legal implications of inheriting a Roth IRA can get extremely complicated.

Even if you manage to avoid inheritance taxes, certain types of withdrawals will be subject to income taxes. And certain actions on your part, such as making a contribution to an inherited Roth IRA as a non-spousal beneficiary, are strictly prohibited.

It is well worth your time and money to seek the guidance of a competent estate attorney, accountant, and/or financial advisor.

Share4
Pin
Tweet
Share1
5 Shares
Last Edited: 2nd December 2013 The content of biblemoneymatters.com is for general information purposes only and does not constitute professional advice. Visitors to biblemoneymatters.com should not act upon the content or information without first seeking appropriate professional advice. In accordance with the latest FTC guidelines, we declare that we have a financial relationship with every company mentioned on this site.

Britt Gillette is the publisher of Your Roth IRA, a reference website dedicated to providing accurate, up-to-date information on Roth IRAs. Britt, along with his wife Jen have two children (Samantha and Tommy), and are passionate about helping people make wise financial planning decisions.