The more I’ve been hearing about the stimulus package that President Obama has been pushing these past few weeks, the less I’ve liked about it.   It seems to be full of all sorts of unnecessary spending, and a good deal of it not even targeted in ways that could actually help.  Now, according to a report by Rasmussen, a majority of voters are opposing the plan as well.    The more details get out, the less people like it.

Support for the economic recovery plan working its way through Congress has fallen again this week. For the first time, a plurality of voters nationwide oppose the $800-billion-plus plan. The latest Rasmussen Reports national telephone survey found that 37% favor the legislation, 43% are opposed, and 20% are not sure.

Two weeks ago, 45% supported the plan. Last week, 42% supported it.  Opposition has grown from 34% two weeks ago to 39% last week and 43% today. Sixty-four percent (64%) of Democrats still support the plan.  That figure is down from 74% a week ago. Just 13% of Republicans and 27% of those not affiliated with either major party agree.  Seventy-two percent (72%) of Republicans oppose the plan along with 50% of unaffiliated voters and 16% of Democrats.


Not only are more people opposing the bill now, a related survey found that most people think the plan could actually hurt:

Fifty percent (50%) of U.S. voters say the final economic recovery plan that emerges from Congress is at least somewhat likely to make things worse rather than better, but 39% say such an outcome is not likely

I am one of those people who think that the stimulus plan as it is proposed right now could actually do more harm than good.

The support for the bill has dropped compared to a week or two ago.  The reason? People are realizing how the bill really won’t do much for the current economic crisis.  The Congressional Budget Office has looked at the bill and found that a majority of the stimulus spending. 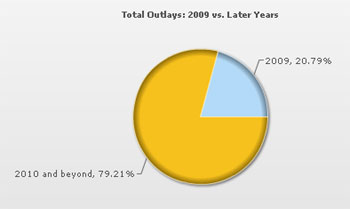 the CBO estimates that less than 21% of the funds would be spent in 2009. Apparently, it is a huge crisis which requires swift action (and no time to read bill text) to pass a massive spending bill — but there seems to be no hurry at all to get the money into the American economy anytime soon.

What do you think of the current stimulus bill?  Would you be in favor of passing it?  Or do you think we should scrap it and start again?

Previous Post: Personal Finance Bible Verse Of The Day: More Blessed To Give
Next Post: Please Vote For Me In Free Money Finance March Madness!