Within the past couple of days I was notified that Bible Money Matters was nominated and was one of the finalists in the “Best Religious Finance Blog” category of the Plutus Awards.  I’m humbled and gratified that someone enjoyed the site enough to nominate us. Before we get too far though, we should clarify – what on earth are the Plutus Awards?

The Plutus Awards are like the Oscars of the personal finance blog world.  They honor the best and the brightest of the year in a variety of categories.   They have categories for everything from “Blog of the Year” to the “Lifetime Achievement Awards”.

So who was Plutus?

In ancient Greek mythology, Plutus was the god of wealth. Much like wealth itself, Plutus was blind, offering his virtues without regard for the virtuosity or merit of the recipient. He was lame but winged, leaving much more quickly than he could arrive.

I’m proud to say that I actually did the logo and badge graphics for the Plutus Awards site for Flexo over at Consumerism Commentary, who is the mastermind behind the awards. If you need a logo too, head over to my logo design site Logos For Websites
.

Vote For Us In The “Best Religious Finance Blog” Category

We’ve been nominated in the “Best Religious Finance Blog” category along with 4 other great Christian finance blogs. 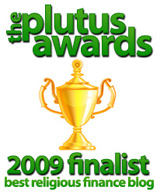 I feel lucky to be included in such company.  Of the 4 other Christian Finance blogs above I’ve been privileged to work with every one of them to one degree or another.  Christian Personal Finance was one of the inspirations for me to start my own blog, and Bob is a great guy.   Matt at Debt Free Adventure is one of my good blogging friends and colleagues.  Craig at Money Help For Christians and Jason at Redeeming Riches both write for this site, and I am grateful for both of their contributions.

So in the end, no matter who you vote for I guess I’m happy because they’re all great guys with great sites.  Selfishly – I hope you vote for me!

Head on over to vote now!

Share
Pin
Tweet
Share
0 Shares
Last Edited: 24th February 2010 The content of biblemoneymatters.com is for general information purposes only and does not constitute professional advice. Visitors to biblemoneymatters.com should not act upon the content or information without first seeking appropriate professional advice. In accordance with the latest FTC guidelines, we declare that we have a financial relationship with every company mentioned on this site.