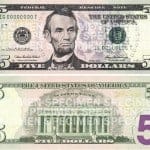 The $5 bill has been around since 1861, over 150 years.  The bill has gone through a variety of different designs,  and there have been multiple presidents and even a civil war general, on it’s face. Among those who have appeared on the bill: Abraham Lincoln Ulysses S. Grant Alexander Hamilton Andrew Jackson Civil War […]

Big news in the technology world today – it looks like the High-definition format war is over and Blu-Ray has won! Toshiba announced today it is pulling out of the HD-DVD business: Toshiba Exits HD DVD Business, Ceding Market to Sony’s Blu-ray – WSJ.com: TOKYO — Blaming the loss of support from a key movie […]

Here is an interesting story on CNN money about Kevin Ham, a domain name king who started out as a doctor, and became a domain name tycoon after discovering how lucrative buying domain names could be. He is also a devout Christian: Kevin Ham, the $300 million master of Web domains Just a few years […]