The past couple of years I’ve heard from quite a few folks who are living on social security and were upset to find out that they wouldn’t be getting cost of living adjustments to their Social Security checks.  For the 2010 and 2011 tax years there was no increase in the amount that people on Social Security would receive.

This week the Social Security administration announced that there would in fact be a cost of living adjustment made for 2012 after a 2 year hiatus. I’m sure a lot of my readers will be happy to hear the news.

The Social Security Administration announced earlier this week that after crunching the numbers after the Consumer Price Index for Urban Wage Earners and Clerical Workers (CPI-W) was released – it was determined that there would be an increase in Social Security benefits of 3.6%.

The 3.6 percent cost-of-living adjustment (COLA) will begin with benefits that nearly 55 million Social Security beneficiaries receive in January 2012. Increased payments to more than 8 million SSI beneficiaries will begin on December 30, 2011.

So benefits and income will rise slightly for the more than 60 million people who receive Social Security income.

How Does The COLA Work?

The cost of living adjustment is made to Social Security benefits in order to ensure that the purchasing power of the dollars given to recipients isn’t eroded over time.    Here’s how it works, from the government site:

The purpose of the COLA is to ensure that the purchasing power of Social Security and Supplemental Security Income (SSI) benefits is not eroded by inflation. It is based on the percentage increase in the Consumer Price Index for Urban Wage Earners and Clerical Workers (CPI-W) from the third quarter of the last year a COLA was determined to the third quarter of the current year. If there is no increase, there can be no COLA.

How Often Are Cost Of Living Adjustments Made? 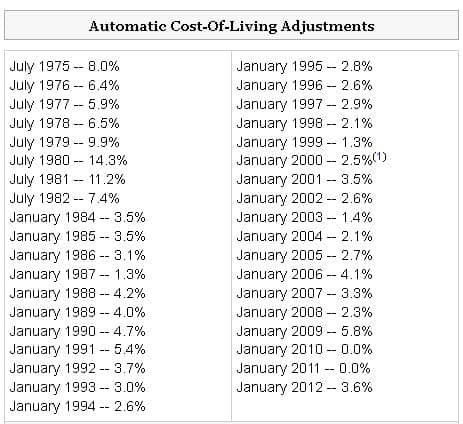 So as you can see not receiving a cost of living adjustment in 2010 and 2011 was upsetting for quite a few people since there had always been an increase.  Since increases are tied to the Consumer Price Index by law, however, there wasn’t much to be done.

The thing is, people often mention the two years of no increase in benefits, but don’t mention the larger than normal increase in 2009 of 5.8%.  TheFinanceBuff.com explains why that is significant:

..people conveniently forget that there was an unusually large 5.8% increase in 2009 . It was unusually large in 2009 because CPI spiked in Q3 2008. Had the increase been calculated using Q4 averages instead of Q3 averages, the Social Security COLA increases would have been 1.3% in 2009, 1.8% in 2010, 1.5% in 2011. Social Security recipients are actually better off with a 5.8% increase up front followed by zero increase for two years than with small but steady increases in last three years.

When the Social Security program started there was no adjustment made to benefits on a yearly basis at all – so someone entering the program would receive the same benefits year in and year out.   It was realized quickly thereafter that inflation was eating into those benefits and some change was needed.  Eventually legislation in 1972 mandated the automatic increases tied to the Consumer Price Index.

How Much Extra Will Be In My Check?

So with the increase, how much extra will be showing up in the average Social Security check?

Nearly 60 million Americans receive benefits, with an average monthly check coming in at nearly $1,100. The COLA increase would translate to a roughly $39 increase.

So a $39 average increase in benefits for 60 million Americans.  How will this increase be paid for?  An increase in taxes and withholding for current wage earners of course!

What are your thoughts on the increase in benefits for Social Security?  Do you think it’s high time an increase was made, or do you think that increases shouldn’t necessarily be automatic? Tell us your thoughts in the comments!

Share3
Pin
Tweet21
Share1
25 Shares
Last Edited: 19th October 2011 The content of biblemoneymatters.com is for general information purposes only and does not constitute professional advice. Visitors to biblemoneymatters.com should not act upon the content or information without first seeking appropriate professional advice. In accordance with the latest FTC guidelines, we declare that we have a financial relationship with every company mentioned on this site.