We had just moved into our new house the previous fall, and it was late spring, early summer 2007. We decided that we’d like to spend a little more time outside, enjoying the weather while it lasted (here in Minnesota, you have to take advantage of the nice days while they’re still here).

We decided to build a nice patio in our backyard so that we could sit outside and eat dinner, entertain or have a nice little campfire for those warm summer nights.

Then we looked into how much it was going to cost. For materials and labor it was going to cost us in excess of 1600-1700 dollars. Ouch! I decided that I would undertake this project on my own. By doing all the labor ourselves we would end up saving almost $1000 dollars on the patio because labor accounted for over half of the cost! Can you say frugal homeowner 101? I took a free class at our local Patio Town to make sure I understood how to build a patio. It was a bit more complicated than I anticipated. I thought it would just be me placing a bunch of bricks down on the ground next to each other. Boy was I wrong. You have to dig a deep pit, place aggregate rock, tamp it down, add sand, screed the sand, and the place bricks one by one. Its a job most people can do, but time consuming. 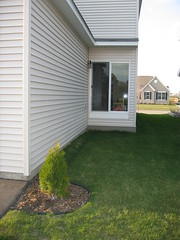 Moving dirt is a lot harder than it looks. We spent the rest of the day Friday just digging out our 8″ pit and moving the dirt to a construction site across the alley. End of day one. 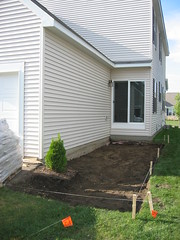 On the beginning of day two we tamped down all the dirt in our big hole manually with a hand tamper. Most people are smart and get a mechanical tamper that does all the work for them. I went the frugal route and got the hand tamper figuring I could save the $30 rental charge. I would regret this later on because just about every muscle in my body was sore.

After tamping down the soil we had to put down aggregate rock/gravel to make a solid base for our brick patio. The aggregate came in large 50 pound bags. We dumped the bags into our pit, making a nice even base for our patio. Again, this took longer than expected, and by the end of the day we realized that we didn’t have enough rock for our hole, we had dug it an inch or two too deep. We ran back to the home improvement store and bought another $200 worth of materials. My frugal job just became less frugal.

While we were loading all of our extra materials I felt something in my shoulder twinge and experienced a shooting pain. Although I didn’t realize it at the time, it turns out I had torn something in my rotator cuff. I continued working through the pain.

After we returned to the job site, we put in the rest of the rock and finished tamping it down. End of day two.

On day three we began placing bricks. First, we poured sand over a small portion of rock aggregate, and screeded it (smoothed it out) using a straight piece of lumber. We carefully placed our bricks in the pattern that we had chosen, and by the end of the day, we had a new patio! After having some steps built for a couple hundred bucks a week or two later, we were done with our project! Total cost? Just over $1000 for a patio and stairs that normally would have cost over $2000.

So this was my most frugal home improvement project ever, but it was also my dumbest project ever. The reason it was the dumbest was because I pushed myself too hard to get the job finished in one weekend, and tore my rotator cuff.  I ended up having to rehabilitate it for the next 6-7 months.  Not fun! 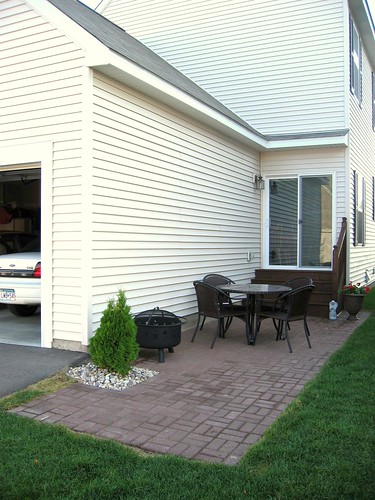 So what’s your “smartest, dumbest, hardest, or frugalist Home Improvement Project or Repair Job that you have undertaken“?

Check out the contest page for more stories of the dumbest and frugalist home improvement project by going to the Win a Drill Contest page.

Share2
Pin
Tweet
Share
2 Shares
Last Edited: 10th February 2014 The content of biblemoneymatters.com is for general information purposes only and does not constitute professional advice. Visitors to biblemoneymatters.com should not act upon the content or information without first seeking appropriate professional advice. In accordance with the latest FTC guidelines, we declare that we have a financial relationship with every company mentioned on this site.