About a week ago my wife informed me that we were going to a political fundraiser for some Minnesota state congressional candidates. I enjoy watching the car crash that is politics in the U.S. as much as the next guy, but the prospect of attending some big dollar fundraiser with a bunch of political muckity mucks was about as appealing as getting teeth pulled.

My wife then told me that her boss, who is pretty deep in Minnesota politics was actually the one throwing the fundraiser, and that we wouldn’t be expected to make any donations or anything. We could just show up. She told me that the fundraiser was being held at a big beautiful 8 million dollar mansion on the bluffs above the Minnesota River Valley, and that it was a smaller gathering of about 50-75 people.

And then she really grabbed my attention by telling me that we would have a chance to meet the governor of Minnesota, Tim Pawlenty. When she said that I knew that I would probably have to go. How often do you get the chance to meet the governor of your state, much less someone who is rumored to be a vice-presidential prospect – and possible future presidential candidate?

We showed up at the fundraiser, and the house it was being held at was beautiful. It was huge on the outside, and even bigger on the inside! 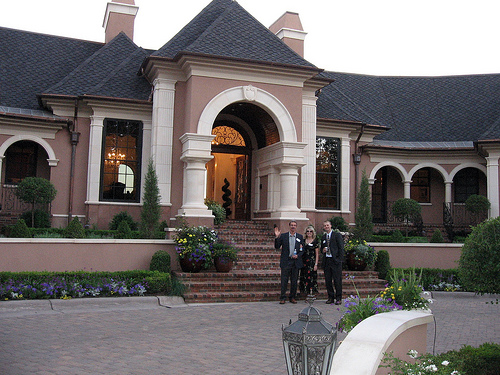 When we walked in the door, everything was top of the line from the beautiful hand-painted frescoes on the walls to the solid marble fireplace in the bedroom. The view from the big picture window when you walked in the front door was amazing to say the least. It felt like you could see the entire Minnesota River Valley.

After milling around for a while we realized that this gathering wasn’t going to be a very big one. It was mainly for some big dollar donors, we were only there because we knew the party planner.  Our chances of having a quick moment with the governor were actually pretty decent.

While we waited for the governor to show up from another event we met the other candidates running for office, and were pretty impressed with them. They seemed like genuinely nice people, albeit a bit unpolished since they hadn’t really run for office before. But hey, it can’t hurt to have the governor coming to your fundraiser!

Before the governor arrived we talked with the party hostess and asked her if she could bring the governor our way for a quick picture when he arrived.  She was very nice and agreed to do just that, as long as we took her picture with him too.

The governor arrived right on schedule and spoke with the hosts and the candidates for a few moments.  They then ushered him outside to go down the stairs to their patio where a microphone was set up for the governor to speak.  On the way the hostess told the governor that we would like a picture with him, and he was happy to oblige.  Here I am with my wife,  the governor and my in-laws.  A great picture for the Christmas cards this year! 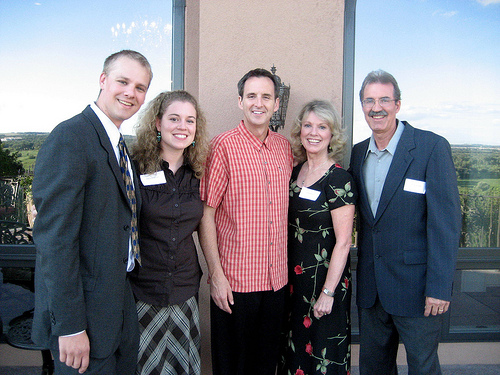 It was actually pretty funny because the first couple of pictures they tried to take with our camera didn’t turn out because we had the sun behind us, and our faces were all in shadow. They had us move and took a couple more pictures.  The governor was very patient with us, and was cracking jokes while they took the pictures. He was an extremely nice guy and was very accommodating to us, and everyone else there.

We all headed down to the patio where there was food and drinks for everyone.  I had one of the best brownies I’ve ever eaten from the buffet. Yum!

Then the governor got up and spoke. 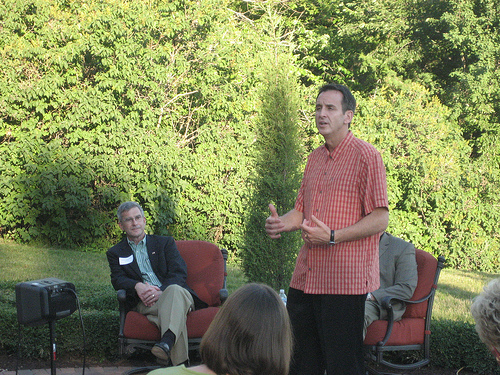 The governor talked about some of his policy initiatives he’s working on currently, the new 35W bridge (after the collapse last August) and some ideas they would like to implement for modernizing schools and other infrastructure. The man sure knows how to capture an audience’s attention, even when talking about dry topics.

After he spoke the governor snuck out because he had one more fundraiser to make it to that evening. We later found out that he had done 4-5 of them in the past 24 hours. The fundraising never ends!

So that’s our experience meeting the governor of Minnesota. I know it’s a bit off topic for this blog, but I thought I’d share anyway.

Have you ever met someone famous, and were they what you imagined them to be? Tell us about it in the comments!

Share
Pin
Tweet
Share
0 Shares
Last Edited: 20th June 2012 The content of biblemoneymatters.com is for general information purposes only and does not constitute professional advice. Visitors to biblemoneymatters.com should not act upon the content or information without first seeking appropriate professional advice. In accordance with the latest FTC guidelines, we declare that we have a financial relationship with every company mentioned on this site.