A Phone Call At Work

Yesterday was a hard day. I had to say goodbye to a very good friend, one of the best that I’ve ever had.

It all started when I got a phone call from my mom around 3 in the afternoon while I was at work. When she calls me at work it usually isn’t good news. The last time she called me in the middle of the day, my grandmother had passed away. I braced myself for whatever she might have to say. 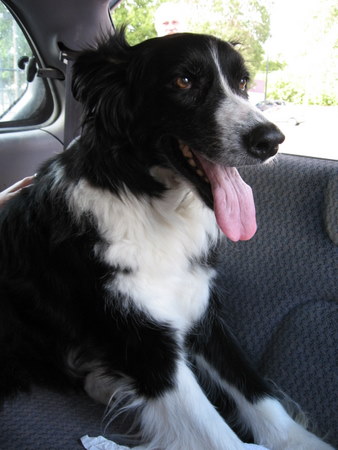 My mother told me that my border collie Buddy, who lives with my parents, wasn’t doing very good. For the last 5 days he hadn’t really been eating. He was having trouble standing, and getting up and down stairs was near impossible. He was in a lot of pain. The vet was gently suggesting that Buddy’s time had come, and that we may want to consider putting him to sleep.

Getting On In Years

We knew that Buddy was getting old. He was 14 1/2 years old, which is a pretty long life for a big 75lb dog like he was.  However losing a pet is never something you expect or really prepare yourself for. I know I hadn’t.

After talking with my mom and hearing about all the problems Buddy had, and how much pain he was in, I agreed that the most humane thing to do would be to let him pass away peacefully at the vet’s office.  He has already had so much pain, so we felt that it was our responsibility as loving pet owners to let Buddy go.

Looking Back At A Life Well Lived

I got Buddy way back in 1996.   I was in college at the time, and living at home. I had never had a dog before, and had always wanted one.   So one day I went to the Humane Society with the intention of finding the perfect dog.  Did I ever!

When I walked into the area where the dogs were kept,  one dog stood out.  That dog was jumping about 3 feet straight up in the air in his dog run, trying to get our attention.  He did, and we took him out to get acquainted.  We fell in love with him, and ended up taking him home that evening. 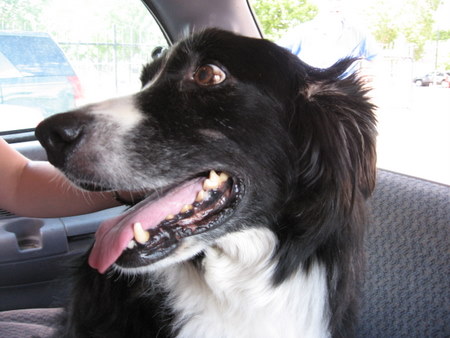 Buddy was such a beautiful dog, but he was in a lot of pain.

Buddy was one of the most affectionate dogs you’ll ever meet, putting his head in your lap when you would sit down next to him, or brushing your hand with his head so that you would pet him.  He loved to play fetch in his earlier years with the tennis ball in the backyard, although the ball always ended up a slobbery mess.

Buddy was a border collie, and sometimes his herding instincts would shine through. I remember at times how he would try to herd small children by running circles around them. He wasn’t always successful, but he loved to try!

Above all, Buddy was always a good friend. He was always happy to see you, and his tail always wagged when you came into the room. He was a blessing sent from God.

My parents picked me up at work since I had carpooled to work. I got into their minivan and scooted into the back seat next to Buddy. He didn’t move.  He was in pain, and was tired.  He was showing it.  He panted heavily and acknowledged that I was there.  I put my arm around him and stroked his fur.  I told him that he was a goooood boy, and that I loved him.  He seemed glad that I was there.   I was glad to be there, and I didn’t want this goodbye to end

My wife was coming to meet us at the veterinary clinic because she wanted to say goodbye to Buddy as well, and be there for me as I went through this tough time.  We hugged Buddy, kissed him, told him how much we loved him, and then took a few pictures, including the one below. 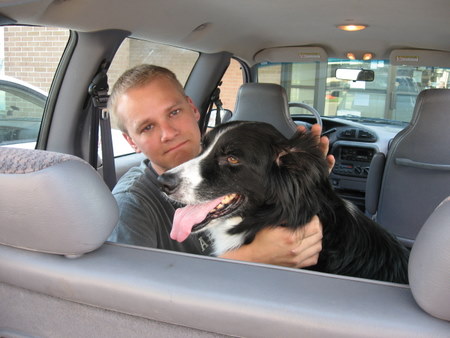 Finally after sitting with Buddy for quite a while, we decided that it was time.  We urged Buddy to get up and out of the van.  He didn’t have the strength,  so I picked him up to lift him out.  He squealed in pain.  At that time I knew we were doing the right thing. Buddy was in so much pain, and it wasn’t fair for us to allow him to go through that any longer.

We brought Buddy into a room in the clinic, and the doctor came in.  After we had finished saying our goodbyes, she injected him.  He was a good dog all the way til the end, he never flinched, and just peacefully put his head down and went to sleep.  I wept.

We’ll miss you Buddy, you were a good boy.

Share7
Pin
Tweet
Share
7 Shares
Last Edited: 16th June 2009 The content of biblemoneymatters.com is for general information purposes only and does not constitute professional advice. Visitors to biblemoneymatters.com should not act upon the content or information without first seeking appropriate professional advice. In accordance with the latest FTC guidelines, we declare that we have a financial relationship with every company mentioned on this site.