I get an up close look each day with four of them scurrying through our home.

I see how they play together, get into and solve conflicts and deal with their parent’s demands. It can be uplifting, humorous and disappointing all in the same day. Or in the same hour.

Each of course is different, even though the DNA of my wife and I run through them all. Without fail, however, they have this one thing in common…a sense of what is theirs. 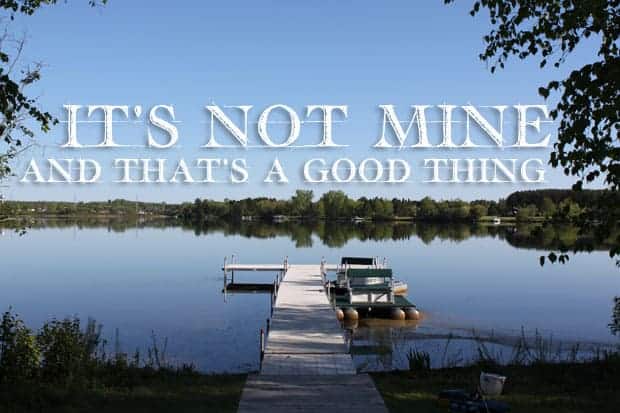 The Concept Of Possession

Our lives are keen on the concept of possession and kids are masters of this world. Don’t believe me? Spend an hour with a group of two year olds in a church nursery. You’ll see them possess stuff, even if they can’t quite speak the language.

“Get your own bottle!”

“Hands off my crackers.”

Before we are too hard on the kiddos though, let’s admit that most of us adults have felt this same way a time or two. We push ourselves to earn money, which is then used to purchase stuff we call our own. We derive great pleasure from our possessions and get real cranky when someone messes with our stuff.

How wrong we have it when we think this way.

The Earth Is the Lord’s

In reality, I possess nothing. No item that I believe I own really belongs to me. I’m embarrassed to admit it took me the first ten years of my post-college adult life to realize this.

Once I did, money and personal property management took on a whole different feel.

“The earth is the Lord’s and all its fullness, the world and those who dwell therein. For He has founded it upon the seas, and established it upon the waters.”

“For every beast of the forest is Mine, and the cattle on a thousand hills.”

God has the authority to say these things because, lest we forget, “In the beginning God created the heavens and the earth.” (Gen. 1:1) He is the one who spoke the world into existence. All that is in it (its fullness) and all who live on it (man and beast alike) belong to Him. Every invention and accomplishment through all of history has its origins in a God who bestowed upon man the mental and physical ability to make it happen.

And that includes everything related to your personal finances.

Your bank account and 401(k) assets belong to God.

Your monthly budget expenditures should flow to things He’d approve.

The car you drive to work and the condo at the beach are His.

Even the baseball card collection you started in second grade resulted from money He allowed you to earn and spend for those items.

It’s undeniable from the pages of Scripture. He is the owner of it all.

So What’s Our Role?

Your perspective about the things around you changes when thinking about life in this way. I once held onto my possessions like a vice grip out of fear of losing them. It scared me to think they might one day be gone.

Realizing God was the ultimate owner reduced my worry. It also helped me more easily slip into my intended role on this earth – as manager of His stuff.

The formal Biblical term for this role is translated steward. Stewards (managers) were expected to give an account of what they had done with the master’s property (Luke 16) and were to be found faithful in their oversight (I Corinthians 4:2). Poor stewards – as in those doing a bad job – were dismissed. Wise ones were praised and given more reward and responsibility.

The stewardship role mirrors that of an asset manager at an investment firm. The money he controls is not his to do with as he pleases. It’s the investor’s (the owner). The manager is not allowed to take it and buy a Ferrari. Well, at least not without consequences.

His goal is to manage it. If he does well the owner may give him more to manage. If their holdings tank due to negligence or unwise investments, the owner will be looking to another firm.

Who do you thinks owns it?

God is calling us every day to be wise stewards. The foundation of wise money management begins with the concept that we are not the owner. Embracing this perspective will change how you see everything around you.

It will impact the choices you make every day.

Are you making wise decisions with what God has entrusted to you? My prayer is that you are because now and in the end it’s all His.

Questions: Has there ever been a time in your life when you lost sight of who “the owner” was? Have you been guilty of becoming upset when people messed with “your” stuff? What else has helped you maintain the proper perspective about money and possessions?

Share29
Pin4
Tweet
Share3
36 Shares
Last Edited: 15th June 2015 The content of biblemoneymatters.com is for general information purposes only and does not constitute professional advice. Visitors to biblemoneymatters.com should not act upon the content or information without first seeking appropriate professional advice. In accordance with the latest FTC guidelines, we declare that we have a financial relationship with every company mentioned on this site.

Previous Post: 4 Tips For Securing Your Retirement Future
Next Post: 5 Ways To Give To The Homeless Without Giving Cash