The next big crisis?

The past year has been a tough one for our economy.  We have seen the companies suffer as the mortgage industry undergoes a huge crisis.  Thousands of foreclosures have happened to people who got into mortgages they couldn’t afford.  Adjustable rate mortgage and interest only loan rates started going up, and people found they couldn’t afford their mortgages anymore.  (One could argue that they never could afford them in the first pace, but that’s an argument for another post) 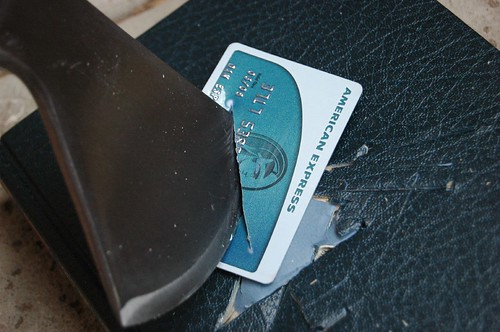 Now, according to ABC News there may be another crisis ready to explode. The credit card crisis:

With banks limiting home equity lines, gas and food bills on the rise, and homeowners struggling to make their mortgage payments, some Americans are turning to credit cards to make ends meet. Many, however, are finding their cards more expensive to use as credit card companies increasingly raise interest rates, lower credit limits and cancel inactive accounts.

It’s all happening, some industry watchers say, for a good reason: The companies are trying to avert a crisis.

In the first three months of the year, commercial banks in the U.S. took losses on 4.7 percent of their credit card loans, up from 3.9 percent the year before, according to the Federal Reserve.

In the last two weeks, major credit card players like American Express, Capital One, Citigroup and Bank of America have all reported larger losses from unpaid card bills. American Express saw second-quarter profits from its U.S. credit card business fall a stunning 96 percent from $580 million in the spring of 2007 to $21 million this year. (Overall, the company reported $655 million in second-quarter profits.)

So people are getting behind, they’re having a hard time paying their mortgages, their home equity lines and paying for everyday essentials.  It’s no surprise that they’re using their credit cards more, making balance transfers and then in turn getting behind on those payments as well.

Who is to blame for the looming credit card crisis?

The article argues that the credit card companies are to blame for much of the problem themselves because when the mortgage sector started tanking, they looked to their credit card divisions to bolster their meager earnings.  They upped the credit limits and offered more cards to higher risk buyers.  It only stands to reason that when they offer credit to people with a history of not paying (thus high risk), that they’ll show a higher number of people defaulting on their debts.

Credit card lending became “a bit too aggressive,” said John Ulzheimer, the president of consumer education for Credit.com, a credit card information site. “People were getting credit vehicles maybe they should not have been getting. Those bad issuances of cards are, in many cases, coming home to roost right now.”

Can companies survive this credit crunch?

Now the question is this, will this looming credit crunch be enough to do in some of these struggling credit card and other financial companies?

Analysts agree that credit card troubles alone likely won’t be enough to topple any one bank in the same spectacular fashion that subprime mortgage losses led to the collapse of Bear Stearns.

But Ron Ianieri, the chief market strategist for the investor education company Options University, said that for banks already suffering from other financial woes, more trouble on the credit card front “could be enough to be the straw that breaks the camel’s bank.”

“I don’t think a credit card crisis would be strong enough to collapse a bank under normal conditions, but these aren’t normal conditions,” he said. “These banks are teetering right now as it is. One more push — it doesn’t have to be a big push — and it could knock them off the top.”

So it’s really up in the air. This credit crisis, along with the foreclosure problems that we’ve seen in the past months could be enough to do in some of these companies. It’s hard to feel sorry for really anybody involved in this fiasco.

In the short term, the credit card companies will probably survive by bumping interest rates up, and lowering credit limits.  That means customers will be paying more in fees, and be even less likely in some cases to make their payments.

If you’re having problems with your debt, I suggest getting into a good financial program, much like Dave Ramsey’s Financial Peace University where you can set up a plan to repay your debts, get rid of your credit cards for good, and find freedom in living without debt.

Credit Cards: The Next Financial Crisis?

Previous Post: Dave Ramsey’s Financial Peace University: Week 9 – Of Mice And Mutual Funds
Next Post: Personal Finance Bible Verse of the Day: I shall not be in want