Establishing positive financial habits that will serve you now and in the future doesn’t happen overnight. It’s often punctuated by mistakes – forgotten bills, poorly planned purchases, unnecessary debt – events that might have been spurred by a simple split-second decision, but are often followed by an avalanche of guilt.

However, as uncomfortable as they may be, mistakes or slip-ups are a way that we can really hone in on spending triggers, organizational deficiencies, or anything else that could perpetuate bad financial habits. It’s a way of pointing out the weaknesses so we can rebuild a system that can withstand whatever life throws into the mix.

So once you’ve recognized the mishap, what can you do to change course? Start with these tips. 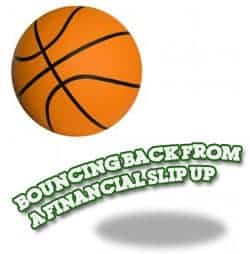 Often times we spend so much time mulling over the effects of the decisions that were made – injecting it with emotion and further charging the intensity of the disappointment or guilt – that we don’t actually inspect the simple logistics of what happened.

Were you bombarded with credit card late fees because you haven’t tackled the pile of papers that continues to grow every time you bring in the mail? Did you make a poorly thought out purchase because you avoided the research and were forced to buy something at the last minute?

Trace the end result back to its roots and determine what systems could have prevented that situation from occurring the first place.

It’s important to note that it’s not about beating yourself up. In fact, doing that often just results in repeat behavior. Shame strips you of your power – the very thing you need to claim in order to get your financial situation back on track.

As much as you are able, strip the emotion out of the situation and stick to logistics. What steps could you take to prevent a similar situation from placing a roadblock in your path? Simplify your processes so it’s not something massive you need to tackle repeatedly, it’s something you could put in place now and essentially automate in the future.

Determine The Underlying Cause

Now on to those pesky emotional causes.

Any repeat behavior we have – financial or otherwise – has an emotional component to it. Even something that would logically seem to be “negative,” or against our better judgment, has some sort of payoff if we are willing to repeat it over and over again — even if it’s a subconscious behavior.

Maybe you overspend on clothing and non-necessities because it temporarily curbs any inadequacies you may be feeling. Maybe you buy extravagant gifts for people because that’s the your fall-back way of expressing your appreciation. Maybe financial tasks in general spur a great deal of anxiety for you.

Either way, without determining what the underlying cause of the event is, you are far more likely to repeat it – even if you do have some sort of surface system in place.

Get into a place where you are able to think about the event and recognize the emotions that it brings up for you. Often times facing things is a lot like turning around and looking at the monster that’s chasing you in a dream. Suddenly it disappears or changes into something else entirely.

Replace The Habits With Something Else

Recognizing what went wrong and the underlying cause is great, but now you need to move to the real action piece – replacing the negative behaviors that have been eradicated with something else.

If you know that certain environments lead you to spend, you can’t necessarily just recognize the behavior – spending – and stop. There has to be that replacement factor – replacing what doesn’t serve you with habits that do. This will look different depending on what types of financial mishaps you are dealing with, but you will be able to feel the difference between what feels like it is serving you and what isn’t.

If you are an impulse shopper because it makes you feel better about yourself in the moment, it may help to find an activity (i.e. exercise, having an uplifting conversation with a friend) that will give you the same feeling without the low of a hefty bill afterwards.

Find what works for you, but make sure it actually addresses what those poor financial choices are giving you – subconsciously or otherwise.

Reclaim Your Power And Keep It All In Perspective

Any time I feel completely overwhelmed by the magnitude of a situation, I try to think back on other situations that occurred in the past that brought up that same feeling. Nine times out of ten, that situation from the past feels nothing but neutral to me now.

The point? All powerful feelings eventually fade, all catastrophic situations eventually dissipate and resort back to some sense of normalcy, all huge mistakes have a way of unraveling themselves in one way or another. Everything transitions into something else.

So what is the point in exerting a great deal of energy thinking about what “should” have been done, when there is no physical way we can go back and change it? That energy is better shifting the situation into something that serves you by changing the decisions you make and the mindset you have in the future. Use the resources you have at your disposal to propel you forward.

Reclaim your power by choosing something different now. Don’t give the mistake any more power than it already has.

Share18
Pin5
Tweet
Share1
24 Shares
Last Edited: 17th December 2013 The content of biblemoneymatters.com is for general information purposes only and does not constitute professional advice. Visitors to biblemoneymatters.com should not act upon the content or information without first seeking appropriate professional advice. In accordance with the latest FTC guidelines, we declare that we have a financial relationship with every company mentioned on this site.

Kayla Albert is a proud Colorado native and personal finance writer for ReadyForZero, a company that is helping Americans manage and pay off debt online. She enjoys sharing tips on saving money and getting out of debt.