The 2012 Summer Olympics have been going on for over a week now and they haven’t been short on exciting moments for fans of team USA.

We’ve seen Michael Phelps eclipse the record for the most medals ever won in Olympics history, and we’ve cheered as Gabby Douglas won the all around Gold Medal in gymnastics.

Some of the things Olympic athletes are able to do are mind boggling to many of us, but as those athletes would most likely tell you, they didn’t learn to do those things overnight.  They’ve had to work extremely hard over a period of many years to get where they are, and they’ve had to make sacrifices in order to be the best.  There is a definite cost to become an Olympic champion.

So what are some attributes of an Olympic athlete that you can emulate in your financial life in order to get ahead? 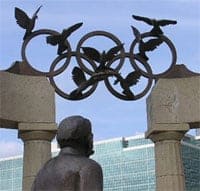 One thing you hear time and again is how Olympic athletes have to have extreme discipline in order to train on a daily basis for their sport. For example, all time Olympic champion Michael Phelps trains hard just about every day.  He gets up early to swim, and in peak training cycles he can swim 80,000 meters a week, nearly 50 miles. He swims twice a day, often for around 5 to 6 hours a day, 6 days a week.  He also lifts weights 3 days a week.  To fuel his monster workouts he can consume upwards of 12,000 calories a day, an amount of food that could normally feed a family of four.

Vision And Focusing On A Specific Goal

Olympic athletes have a clear vision of where they want to go, and what they want to accomplish. They are able to visualize their goal, even if it’s years in the future, and work hard on a daily basis towards attaining that goal.

Similarly, when we’re saving for a new home, for retirement or some other financial goal, we need to have vision in our financial lives so that we don’t fall prey to short sighted decisions that could short circuit our plans.  We need to be able to see ourselves years down the line enjoying the fruits of our labors, and being able to live the life we want.

If you’re an Olympic athlete in training you need to be consistent in your diet, your training and in your routines. You don’t become a gold medal champion by sitting on the couch eating potato chips, You have to train, day in and day out – rain or shine.

When we begin a budget and set financial goals, nothing will happen unless we follow through and are consistent in following our plan.  If you’ve set a budget, you need to check it on a consistent basis, have monthly budget meetings and adjust your spending when warranted.  Setup automatic deposits for savings goals, and make as many things as you can automatic in your financial lives so that they happen consistently, instead of when you remember to or have a good month.

We’ve all heard of the sacrifices that athletes and their families have had to make in order to reach their goals. Take all around gymnastics gold medalist Gabby Douglas for example.  Her single mother of four made huge sacrifices in order for her to be able to continue her gymnastics training, and even paid for her to leave her hometown and move 3000 miles away to be coached by an elite gymnastics coach in Iowa. The training was hard, and at times she wanted to quit, but her mom told her that, “You’ve sacrificed all of this time. You’ve sacrificed your body. You’ve sacrificed everything for this dream…life is not easy, you  have to fight and just refuse to quit.”  She told her daughter that sometimes things will be hard, but if you fight and make those sacrifices, you can make it through and you’ll have something to be proud of no matter the outcome.

In our financial lives we often have to make sacrifices in order to make our dreams come true as well. Whether it’s getting a second job in order to help pay off debt faster, not buying the things you want in order to focus on a long term goal or just making the sacrifice to spend more time on your finances instead of doing things that you’d rather do.  Sacrifice is often a component of how we reach our financial goals.

Striving For The Gold 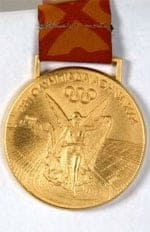 Training to be an Olympic athlete is an endeavor that takes discipline, vision, consistency and a willingness to sacrifice to reach your goals.  While we may not be world class athletes, we can also use many of these same attributes to get ahead in our financial lives.  If we can be dedicated to improving our finances, set goals for our future and remain consistent in our saving and spending plans, we too can benefit and take home the financial (and sometimes literal) gold.

What are your thoughts?  Are there other attributes that you think we can look to Olympic athletes to model for us that can apply to our financial lives?

Share12
Pin3
Tweet25
Share12
52 Shares
Last Edited: 8th August 2012 The content of biblemoneymatters.com is for general information purposes only and does not constitute professional advice. Visitors to biblemoneymatters.com should not act upon the content or information without first seeking appropriate professional advice. In accordance with the latest FTC guidelines, we declare that we have a financial relationship with every company mentioned on this site.