Have you lost your desire to work hard?

It sure seems like a growing epidemic in our culture. Everywhere I look people are trying to cut corners and do the bare minimum to get ahead.

We all trend towards laziness at times but it’s more of a challenge for younger people. As a teacher I could see it in the lives of my middle and high school students. On any given day they would bristle at the thought of a 30-minute homework assignment. If they had to think about the answer to a problem for more than two consecutive minutes they’d shut down (and then write down any old answer just to get the assignment done).

This mindset has me scared for the future. It discourages me that people believe they should be given things just because they “deserve it,” or because “it’s only fair” or because “it’s the government’s duty.”

Shouldn’t we be more inclined to work than sit around and receive handouts? Shouldn’t we see tasks through to the end and then and only then reap the rewards?

The truth is you and I can unlock great rewards if we do this one thing – work hard. 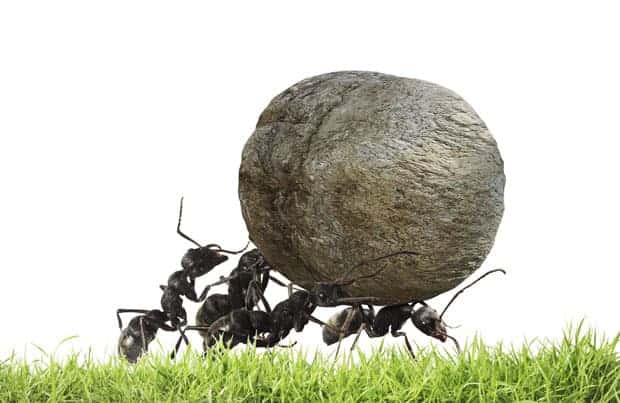 People Who Had a Mind to Work

The story of Nehemiah is one of my favorites in the Bible. Some time after the fall of Israel, Nehemiah was granted permission by King Artaxerxes of Persia to lead an expedition to rebuild the city wall that had lain in ruin for years around Jerusalem. It was no small task considering the engineering challenges and the intense opposition that came from the neighboring people groups who did not want to see Jerusalem restored to glory.

Upon his arrival, Nehemiah secretly gathered a few of his countrymen and they walked around the city at night to observe the condition of the broken down wall. After a thorough tour of the city, Nehemiah shared the vision God had placed on his heart. To rebuild the wall would require effort, focus and courage. It must be completed he pleaded, so their people would no longer be the laughing stock of the surrounding nations.

Upon hearing Nehemiah’s appeal, his countrymen had this strong but simple response – “Let us rise up and build” (Nehemiah 2:20).

There was no whining. There wasn’t concern for how difficult the work might be. Instead there was action based on the eager anticipation of the potential reward. They set their minds and fixed their hands to the appointed task.

Their devotion to work paid off as the wall was completed in only 52 days! You get the sense that nothing would have stopped them because of their determination to get it done. In fact, this short phrase from Nehemiah 4:6 tells us all we need to know about them – “…for the people had a mind to work.”

In All Labor There Is Profit

No success – financial or otherwise – comes without embracing the value of work. The Bible addresses this in many places, perhaps nowhere more clearly than in Proverbs 14:23 where we read, “In all labor there is profit, but idle chatter leads only to poverty.”

Work leads to profit. We can talk a good talk but unless we actually work none of our goals will be reached. Daily, focused, hard work over the long hall brings increased financial resources to meet our needs.

However, there is more to it than just a financial component. Hard work also produces internal rewards.

During college, I pulled three all-nighters. Two of those resulted from test study sessions for one class during my freshman year – History of Civilization. My professor was notorious for being hard. He was fair, but the content of the course was enormous, his lectures were often over my head and the tests were brutal.

After six weeks I was considering dropping the class but I never pulled the trigger. Something inside me didn’t want to quit.

I decided to put it all on the line to pass that class. To this day I remember the feeling of exiting the final exam knowing I had given it my best. I also remember the elation I felt a few days later when I received my passing grade of C.

In academics a C stands for average. For me, there was nothing average about that grade. I was proud I had passed but even more proud in the effort I had put forth. The amount of labor required to pass taught me, for maybe the first time, what true hard work meant. I’m convinced to this day that class helped me develop the character to succeed at the college level.

God instilled in each of us a work ethic. It’s there so we can provide for ourselves and accomplish good in this world. You cannot profit though – financially or otherwise – if you choose to give it less than your best.

Questions: Has there ever been a time where you gave it less than your best? Do you think our culture still places value on hard work? How can we get across to young

Share30
Pin2
Tweet
Share2
34 Shares
Last Edited: 15th September 2015 The content of biblemoneymatters.com is for general information purposes only and does not constitute professional advice. Visitors to biblemoneymatters.com should not act upon the content or information without first seeking appropriate professional advice. In accordance with the latest FTC guidelines, we declare that we have a financial relationship with every company mentioned on this site.

Previous Post: How Long Will A Negative Event Appear On My Credit Report?
Next Post: Grocery Bill Rising? Consider These Alternative Places To Buy Groceries