A question that I’ve struggled with over the past few years is whether the money my wife and I pay every month for health insurance premiums are really worth it.

We’re paying thousands of dollars every year for coverage, and we could never really see much benefit. We’re young and healthy and we don’t have any major medical costs. We don’t have any family history of problems, so we thought that maybe we should just discontinue the coverage and invest the saved money?

Our thinking is apparently shared by a large number of people in this country.

According to the Census Bureau Nearly 28.5 million million Americans, or 8.8 percent of the population, were without health insurance in 2017, the latest government data available. Granted, a majority of those people probably just can’t afford health insurance because of rising costs, but a large number of them are also choosing not to pay for it because they feel the money can be better spent elsewhere.

We Decided To Pay For Our Coverage Anyway. We’re Glad We Did. 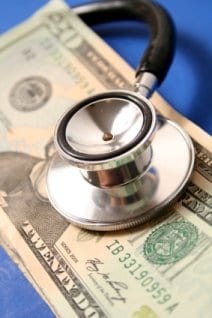 Despite the fact that we weren’t sure we were getting any real value from our health insurance, we continued our coverage through my employer, and swallowed the bitter pill that is monthly premiums.

This past month my view on the whole subject of health insurance changed dramatically due to a health crisis that my wife experienced.


Maria went to the chiropractor last month because of some back pain she was experiencing. She was adjusted by the doctor, and went home, only to experience pain in her leg. The next day she went back in to be adjusted again. The chiropractor told her that he thought she had a pulled muscle, or was having discomfort from being adjusted the previous day. He adjusted her again, but the pain was now 10 times worse than before.

After talking with her mother about the pain my wife decided to go into the local clinic. The doctor we met with also thought it might just be a pulled muscle or something relatively benign. After my mother-in-law insisted, they did a CT scan. They discovered that my wife had a very serious blood clot in her groin area. If they hadn’t discovered it, it was pretty likely that she would have died. She was admitted to the hospital immediately.

After being checked into the hospital that afternoon my wife underwent a series of tests which told us that her leg was completely clotted and there was little to no blood flow. The doctors put her on blood thinners immediately, hoping to reverse the tide and remove the blockage in her veins.

After being in the hospital for 4 nights Maria’s leg wasn’t getting any better. In fact, it was getting worse. Her leg had swollen to 5 times its normal size, and she was in extreme pain. The doctors suggested that we move my wife to a bigger hospital in Minneapolis that would be able to perform a procedure to unblock her veins.

We moved her to the new hospital and had 4 procedures done over the next week and a half. She was in intensive care for a good part of the time, and was constantly on an IV drip of blood thinners. After being in the hospital for 3 weeks she was finally well enough to go home.

Health Insurance – Is It Worth It?

What’s the point of my story? My wife is 27 years old, has never had a history of health issues, and never had any symptoms until her blood clot happened. Sometimes even seemingly healthy people have health issues just lying below the surface, just waiting to rear their ugly heads.

In our case we weren’t happy with having to pay large premiums every month for insurance coverage, but now that we’ve had a major health crisis, we’re very thankful we had that coverage. Without it we would now be paying hundreds of thousands of dollars for all of the medical costs we incurred in the last month. With no coverage we would soon be bankrupt.

I have an acquaintance who had a similar situation a couple of years ago. His wife was in a major car accident and ended up having to be in the hospital for several weeks. His family didn’t have insurance, and they paid the price. They’ve since filed for bankruptcy, and have never been the same financially since. From the NCHC:

You’ll need to decide whether or not you think health insurance is right for your family, but please consider. All it takes is one slip, one unknown health issue, one car accident – and your life will be turned upside down like ours was. If you have decided against getting health insurance because of the costs, please remember, those extra dollars you have to pay now may mean the difference between bankruptcy and good financial health down the road.

If You’re Not Covered, Start Looking For Health Insurance Today!

If you don’t have health insurance coverage, it might be a good idea to start looking for coverage today.  You never know when you’ll have a medical emergency like we did.   Get rate quotes through a service like the one I recommend, eHealth Insurance, where you can get quotes from many different companies and choose from hundreds of different plans.

Do you have a story where having  health insurance saved you money, or kept you from going into bankruptcy?  Tell us about it in the comments!

Share14
Pin
Tweet5
Share
19 Shares
Last Edited: 12th March 2019 The content of biblemoneymatters.com is for general information purposes only and does not constitute professional advice. Visitors to biblemoneymatters.com should not act upon the content or information without first seeking appropriate professional advice. In accordance with the latest FTC guidelines, we declare that we have a financial relationship with every company mentioned on this site.