These past couple of years we’ve been hearing a lot of talk about how the rich aren’t paying their fair share, they aren’t taxed enough, and that they ought to be spreading the wealth around.

Personally I don’t think that us taxing the rich more, or trying to bring others down will end up leading to more prosperity for others.

Someone else in our history knew how many like to tear others down, and talked about how they shouldn’t be doing that because having the rich there as an example, is an encouragement to others that they may someday achieve great things.

Property is the fruit of labor; property is desirable; is a positive good in the world. That some should be rich shows that others may become rich, and hence, is just encouragement to industry and enterprise. Let not him who is houseless pull down the house of another; but let him labor diligently and build one for himself, thus by example assuring that his own shall be safe from violence when built. – Abraham Lincoln in a March 21st 1864 address 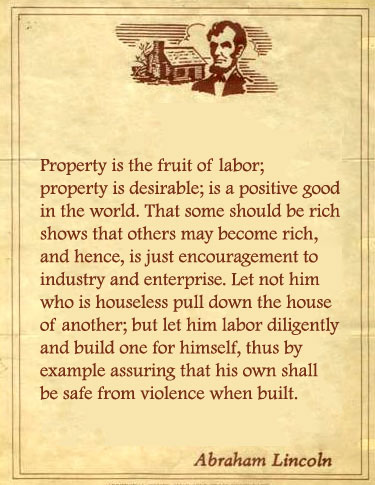 Originally I had the quote below as the basis for this post, but upon further examination I realized that it wasn’t an authentic Lincoln quote. Even so, I think the sentiment mirrors the one in the actual Lincoln quote above.

The  quote above, called the “The 10 Cannots” was written by William J. H. Boetcker, a Presbyterian minister and included in a pamphlet titled “Lincoln On Limitations”. From Snopes.com:


These words are often attributed to Abraham Lincoln, but according to the book They Never Said it: A Book of Fake Quotes, Misquotes, & Misleading Attributions, they are not from Lincoln.

The quotes were published in 1942 by William J. H. Boetcker, a Presbyterian minister. He released a pamphlet titled Lincoln On Limitations, which did include a Lincoln quote, but also added 10 statements written by Boetcker himself.

Do you think the points that these two quotes make are still valid today? Why or why not?

Share57
Pin9
Tweet9
Share2
77 Shares
Last Edited: 11th January 2019 The content of biblemoneymatters.com is for general information purposes only and does not constitute professional advice. Visitors to biblemoneymatters.com should not act upon the content or information without first seeking appropriate professional advice. In accordance with the latest FTC guidelines, we declare that we have a financial relationship with every company mentioned on this site.

Previous Post: Personal Finance Bible Verse Of The Day: Owe Nothing But Love
Next Post: Extra Money Update, Links And 7 Things You Didn’t Know About Me