Always bear in mind that your own resolution to succeed is more important than any other. -Abraham Lincoln

A lesson everyone must learn is the need to persist when it is difficult. When we experience defeat and rejection, the easiest and most logical thing to do is to quit, but the successful have learned to persist. 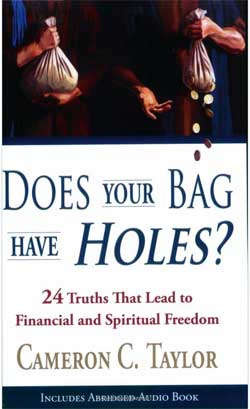 Before Mark Victor Hansen and Jack Canfield became the bestselling authors of the Chicken Soup for the Soul series, which has now sold over 100 million copies, they were rejected by 140 publishers.

They were told by their agent, “I can’t sell this book—I’m giving it back to you guys.”

Before the Wright brothers became the inventors of modern aviation, they had thousands of failed experiments and glides.

Orville Wright wrote, “Our first experiments were rather disappointing. The machine at times seemed to be entirely beyond control” (Wilbur Wright, Orville Wright, Octave Chanute, and Marvin Wilks McFarland, The Papers of Wilbur and Orville Wright: 1899-1905, (McGraw-Hill, 1953) p. 75).

Stephen R. Covey, author the The Seven Habits of Highly Effective People, created one of the largest leadership development companies in the world. Before the company was worth $160 million, the company endured 11 straight years of negative cash flow.

The company had nothing in the bank, they were totally extended on their accounts payable, and their credit lines were maxed out. Their “debt to tangible net worth” ratio was 223 to 1. Over the next two and a half years, the company value grew to a worth of $160 million (Stephen M.R. Covey, The Speed of Trust, (New York: Free Press, 2006) p. 109).

Before Sam Walton founded Wal-Mart, he lost his first store, a Ben Franklin variety store, after 5 years of hard work.

Sam Walton wrote of the experience, “It was the low point of my business life. I felt sick to my stomach. I couldn’t believe it was happening to me. It really was a nightmare. I had built the best variety store in the whole region and worked hard in the community—done everything right—and now I was being kicked out of town. It didn’t seem fair. . . I’ve always thought of problems as challenges, and this one wasn’t any different. . . The challenge at hand was simple enough to figure out: I had to pick myself up and get on with it, do it all over again, only even better this time. . . I had a chance for a brand-new start, and this time I knew what I was doing” (Sam Walton, Sam Walton, (New York: Doubleday, 1992) p. 30-31).

Walt Disney suffered a devastating setback in 1928; a blow so harsh that his career seemed about to disintegrate. He lost his first successful cartoon creation, “Oswald the Lucky Rabbit,” because he had naively signed away the ownership rights.

Before Kentucky Fried Chicken (KFC) was one of the world’s largest restaurants, Colonel Sanders drove all across the country from restaurant to restaurant cooking batches of chicken for restaurant owners and their employees looking for someone willing to purchase his chicken recipe. Colonel Sanders persisted through 1,009 rejections until he got a ‘yes’(Anthony Robbins, Unlimited Power, (New York: Simon & Schuster, 1986) p. 14).

After his first ‘yes,’ his franchising idea began to take off. By 1964, at age 74, Colonel Sanders had more than 600 franchised outlets for his chicken in the United States and Canada, and he sold his interest in the U.S. Company for $2 million ($13 million in 2006 dollars).  KFC now does billions in sales each year and serves millions of customers daily in over 13,000 restaurants in 80 countries.

Before Sylvester Stallone was a famous writer and actor, he was rejected by over 600 casting agents and was unable to sell his first 8 screen plays.

In 1975, Stallone saw a fight between Muhammad Ali and Chuck Wepner in which Wepner was a 30:1 underdog. Inspired by this fight, Stallone began developing the Rocky screenplay.

There are no failures in life, only those who quit before success. Failure is a part of learning.

The formula for success is trying until you succeed. If you give up during the struggle, you will never experience the victory.

This is an article by Cameron C. Taylor, author of the book Does Your Bag Have Holes? 24 Truths That Lead to Financial and Spiritual Freedom.  DoesYourBagHaveHoles.org

Share36
Pin
Tweet4
Share4
44 Shares
Last Edited: 31st July 2017 The content of biblemoneymatters.com is for general information purposes only and does not constitute professional advice. Visitors to biblemoneymatters.com should not act upon the content or information without first seeking appropriate professional advice. In accordance with the latest FTC guidelines, we declare that we have a financial relationship with every company mentioned on this site.