A common theme that I have on this blog is that credit card companies are never looking out for your best interests, and you need to make sure you always keep a wary eye on them.

Think those rewards cards have no down sides?  Think again.  Think that the credit card company won’t jack up your rates even though you’ve never missed a payment? Think again. 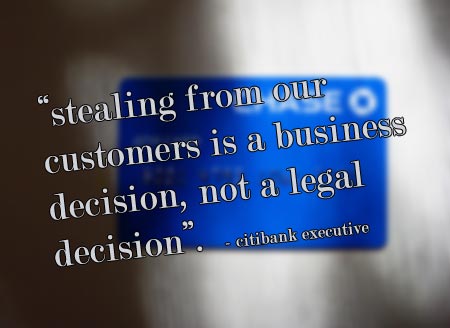 Case in point is this article titled “California: Citibank Stole $14 Million from its Customers” found on consumeraffairs.com:


California Attorney General Edmund G. Brown Jr. today announced that he has reached a settlement with Citibank after a three-year investigation into the company’s use of an illegal “account sweeping” program.

Nationally, the company took more than $14 million from its customers, including $1.6 million from California residents, through the use of a computer program that wrongfully swept positive account balances from credit-card customer accounts into Citibank’s general fund, Brown said.

“The company knowingly stole from its customers, mostly poor people and the recently deceased, when it designed and implemented the sweeps,” Brown said. “When a whistleblower uncovered the scam and brought it to his superiors, they buried the information and continued the illegal practice.”

I guess I can’t exactly say I’m surprised by the credit card companies going this far, I guess I just never thought they’d be that brazen to just actually steal people’s money! The article continues:

Between 1992 and 2003, Citibank employed a computerized “credit sweep” process to automatically remove positive or credit balances from credit-card customer accounts.

An account could show a credit balance if a customer double-paid a bill or returned a purchase for credit. The credit sweeps were done without notifying the customer and without regard for whether the customer had any unpaid balances or other charges owed to Citibank.

The credit sweeps targeted more than 53,000 customers nationwide. All of the affected accounts were in a recovery status, which includes accounts of customers who have died, sought bankruptcy protection, or been the target of litigation or other collection efforts by Citibank.

In July of 2001, a Citibank employee uncovered the practice and brought it to the attention of his superiors. The employee was later fired for discussing the credit sweeps with an internal audit team.


And finally, here is my favorite quote from the article:

In the words of a Citibank executive, “Stealing from our customers is a business decision, not a legal decision.” The same executive later said that the sweep program could not be stopped because it would reduce the executive bonus pool, Brown charged.

Wow. Stealing from our customers is a business decision. What can you add to that?

Share
Pin
Tweet
Share
0 Shares
Last Edited: 11th November 2011 The content of biblemoneymatters.com is for general information purposes only and does not constitute professional advice. Visitors to biblemoneymatters.com should not act upon the content or information without first seeking appropriate professional advice. In accordance with the latest FTC guidelines, we declare that we have a financial relationship with every company mentioned on this site.