If you’ve been watching the news lately you’ve probably seen the rash of bad news that we’ve had surrounding large companies and CEOs keeping cooked books, running Ponzi schemes and just defrauding people in all sorts of ways.

It hasn’t been one isolated incident, but multiple incidents.  The one thing they all have in common?  Greed. 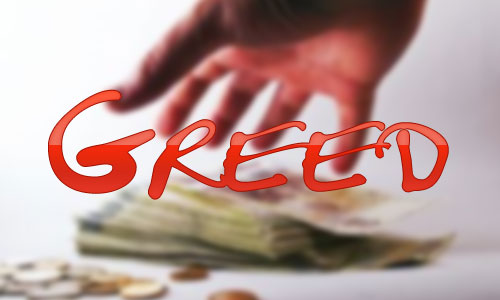 The first one I read about in recent weeks was big news here in Minnesota when Tom Petters of Petters Group Worldwide (which owns Sun Country Airlines, Polaroid, and some other big names) was arrested by the FBI for running an investment scheme over the years where he allegedly defrauded investors of billions of dollars.  He lured them into funding a company based on tens of millions of dollars in purchases and sales that never occurred.  The scheme was only found out when one executive with knowledge of what was going on turned herself in and offered to testify.

Part of the sadness around this whole situation is that Petters and others were very generous with “their” money,  giving to charities, universities and others.  Now we realize it wasn’t their money to give.  They were greedy, and were giving away other’s money.

Bernard L. Madoff, a former chairman of the Nasdaq Stock Market and a force in Wall Street trading for nearly 50 years, was arrested by federal agents Thursday, a day after his sons turned him in for running what they said their father called ‘a giant Ponzi scheme.

Over the years Madoff’s investment advisory business had almost always shown good returns, even when others weren’t doing as well.  People thought that he was either getting illegal insider trading information, or was a trading genius.  Most never imagined, however, that he was cooking the books, and creating a giant Ponzi scheme where the losses from old clients investments were paid out as gains from the principal brought in by new investors.

All in all, the scheme ended up costing investors in excess of 50 billion dollars!  That’s an amazing amount of money, dwarfing all previous Ponzi schemes in comparison.

The criminal complaint said that when Mr. Cacioppi and another agent went to Mr. Madoff’s apartment Thursday, Mr. Madoff told them: “There is no innocent explanation.” Mr. Madoff told the agents that “he paid investors with money that wasn’t there,” adding that he was “broke” and had decided “it could not go on.” He said he expected to go to jail.

One day this man was living the high life, enjoying all the things that his illicit money had bought, and the next day he is a broken man, expecting to go to jail.

Greed has a funny way of perpetuating itself.  You do things you would have never thought possible, just for the lure of a quick buck, or two, or 50 billion.  Lives are ruined.

Another sad point to this story is the fact that for years many top wall street gurus suspected that something was up with Maddow and his company’s amazing returns.  They thought he might be doing some insider trading, or something along those lines.  But instead of looking for someone to investigate them, or running the other way with their money, they invested with him because his returns were so good.  They didn’t care if he was doing anything illegal.  They continued investing with him because of greed.

What does this situation tell us?  Whether you’re dealing with large amounts of money, or with billions of dollars as these men were, you need to guard against becoming possessed with greed, and the love of money.  We need to be content with the things we have, and when we do come to situations where we can deal with integrity or not, we need to remember these words:

But godliness with contentment is great gain. For we brought nothing into the world, and we can take nothing out of it.  But if we have food and clothing, we will be content with that.  People who want to get rich fall into temptation and a trap and into many foolish and harmful desires that plunge men into ruin and destruction.  For the love of money is a root of all kinds of evil.  Some people, eager for money, have wandered from the faith and pierced themselves with many griefs. 1 Timothy 6:6-10

These men, who by all accounts were very generous and kind men otherwise, were possessed with greed, and allowed themselves to do things that they knew were wrong, just for a quick buck.   We need to remember that even in our own lives we’ll be held to account one day for our own actions, and we need to guard our hearts against this type of greed.  If we don’t, the results, while maybe not on the same scale, can be equally as ruinous.

Share22
Pin2
Tweet4
Share1
29 Shares
Last Edited: 14th September 2015 The content of biblemoneymatters.com is for general information purposes only and does not constitute professional advice. Visitors to biblemoneymatters.com should not act upon the content or information without first seeking appropriate professional advice. In accordance with the latest FTC guidelines, we declare that we have a financial relationship with every company mentioned on this site.

Previous Post: Devotional: Bread for Today
Next Post: Motivate Yourself By Setting Goals And Rewarding Yourself When You Meet Them