May I never boast except in the cross of our Lord Jesus Christ, through which the world has been crucified to me, and I to the world. – Galatians 6:14

When I was in high school, I placed second in a computer competition at the state conference for Future Business Leaders of America. Usually only the first-place winner moves on to the national competition, but he couldn’t make the trip. So the state organization asked me to compete in his place.

With some funding from my school and my grandma, I flew to Washington, D.C. for the national conference. The competition was tough but I felt confident. I ended up placing eighth.

Of course, I had wanted to place first, but eighth felt great. Eighth place in the whole country sounded really good. My chest puffed with pride as I gloried in my accomplishment. Before the national competition, the local newspaper published an article about me with the headline: “Calculating Lad: Handicapped Computer Whiz Has Point to Prove.” 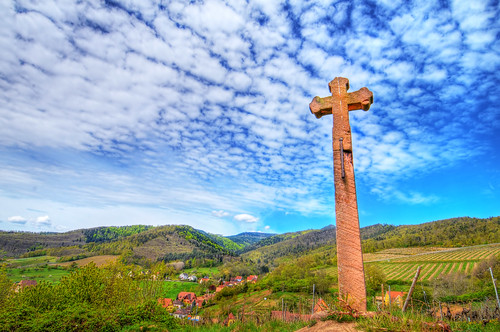 The point I wanted to prove was that having a physical disability does not mean you cannot accomplish great things. After placing eighth nationally, I felt I had proved my point. Oh, how I flushed with pride whenever I looked at my award plaque hanging on my bedroom wall!

The apostle Paul had a lot he could glory in too. He could brag about his heritage as an Israelite of the tribe of Benjamin. He could take pride in his strict observance of the law. He could impress others with his study under the great Jewish teacher Gamaliel.

Perhaps he did glory in these things at one time. But later in life Paul said, “May I never boast except in the cross of our Lord Jesus Christ” (Galatians 6:14a).

Paul gloried in the Cross. How foolish that must have seemed to some! “He glories in an instrument of death? Is he sick?”

We should glory in nothing except the Cross of our Lord Jesus Christ. All else fades in comparison.

Share
Pin
Tweet
Share
0 Shares
Last Edited: 4th March 2013 The content of biblemoneymatters.com is for general information purposes only and does not constitute professional advice. Visitors to biblemoneymatters.com should not act upon the content or information without first seeking appropriate professional advice. In accordance with the latest FTC guidelines, we declare that we have a financial relationship with every company mentioned on this site.

Previous Post: Lawmakers Push For An Extension Of The $8000 First Time Homebuyers Tax Credit Into 2010 In Proposed Bill
Next Post: Buy And Hold Investing For Beginners