The 2014 tax rates have been released for a couple of months now, but I haven’t gotten around to sharing them until now.

For most people the 2014 tax rates won’t really matter that much until early 2015 when they start thinking about filing their taxes, but if you’re a small business owner or a freelancer paying estimated tax payments throughout the year,  knowing what the 2014 marginal tax rates will be could be helpful.

If you’re just starting to think about filing your 2013 taxes right now, you may want to check out the 2013 tax brackets.

For 2013 there was quite a bit of uncertainty when it came to the tax rates, there were a lot of changes that were rumored to be happening, but in the end the main change to the tax rates was that the 39.6 percent tax rate for higher income earners was re-instated after 35% was the highest rate for quite a while.

So now that 2014 has arrived, what changes can we expect to see in the 2014 marginal tax rates?

What Is A Marginal Tax Rate?

The marginal tax rates for 2014 are now completed, and you can find them in the table below.

By way of comparison, here is the 2013 tax brackets.

As you can see, the changes mainly are small bumps in the marginal tax rates due to the rate of inflation that the IRS announced it would use back in September of 2013.

There aren’t any major changes like there were last year, when the 39.6% tax bracket was added back in.

Inflation not only has an affect on the tax brackets, but also on the standard deduction and personal exemption amounts.

What Is Your Effective Tax Rate?

So we already know that your marginal tax rate is determined by your last dollar of income. Your effective tax rate is the rate you actually pay based on the brackets.

For example, let’s say you’re a single filer with $100,000 of income, in the 28% tax bracket. If you have a simple tax situation you would then figure out your effective tax rate by doing the following:

So now after exemptions and standard deductions for a single filer, we have $89,850 of taxable income that we can use when looking at the tax rate schedules. 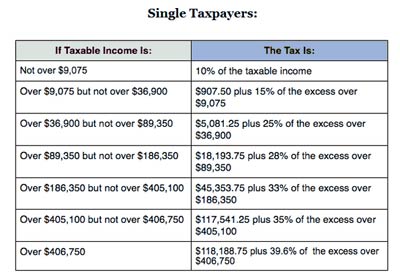 So we would then see the following taxes on the $89,850 of taxable income (assuming no other deductions):

So effectively this hypothetical person would be paying  18.33% in taxes, despite being in the 28% tax bracket.

Have questions or comments about the marginal tax rates for 2014?  Share your thoughts in the comments!

Share26
Pin10
Tweet2
Share1
39 Shares
Last Edited: 23rd January 2014 The content of biblemoneymatters.com is for general information purposes only and does not constitute professional advice. Visitors to biblemoneymatters.com should not act upon the content or information without first seeking appropriate professional advice. In accordance with the latest FTC guidelines, we declare that we have a financial relationship with every company mentioned on this site.

Previous Post: How To Put Together A More Functional And Organized Home Office
Next Post: 7 Things Unrelated To Money That Can Boost Your Finances